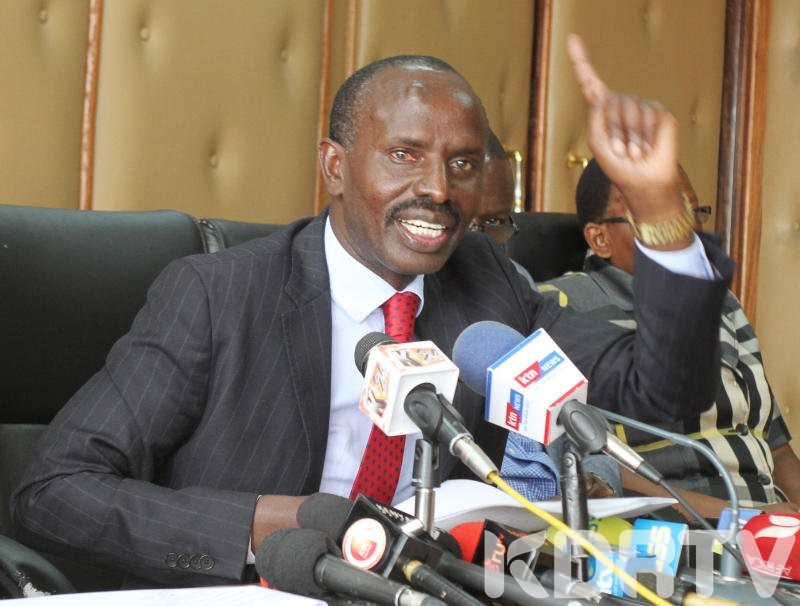 Kenya National  Union of Teachers (KNUT) administrators have taken the battle with Secretary General Wilson Sossion a notch higher by issuing an ultimatum to have all property returned.

The administrators have embattled their war with the Secretary General by threatening arrest in case all property associated with the Union would not be returned by Monday.

This message was passed across during a presser headed by John Munyi, mentioning the official car as among the properties to be returned.

“You have until Monday 8.00AM to return all the Union property in your possession. You hold no right to hold onto the property any longer since we were briefed that you already acquired a new one,” said Munyi.

According to Mr. Munyi, Sossion ceased to be the Secretary General after he was ousted and replaced hence held no other powers to hold onto Union property.

Ideally Munyi who is also the spokesperson for the Union claimed that other officials did not want him in office hence he is making it hard for his replacement Hesborn Otieno to take over and manage the Union affairs.

“Failure to return all property by Monday will force us to seek court orders, have you arrested and charged,” said Munyi.

READ ALSO: DP Ruto’s Plan To Have Sossion Out Of KNUT Thwarted As Court Reinstates The ODM MP As KNUT Secretary General

Sossion has been one of the longest serving officials of KNUT having managed to implement and orchestrate different development plans that have in some ways improved the lives of teachers.

The strongman has managed to plan and put stage some of the largest, longest and widest strikes in the Kenyan history, advocating for change and increased pay for teachers.

However, the rain started beating the Secretary General after he joined politics and was a nominated Member of Parliament through the ODM party.

The Union officials accused him of serving political interests and making irrational decisions without involving them.

It was then that a night dethroning was planned, without his knowledge and he was frantically thrown out of office.

Although Sossion went to court and sought orders stopping his ouster from office, the Union members are stern and have made it obvious that his presence was not wanted.