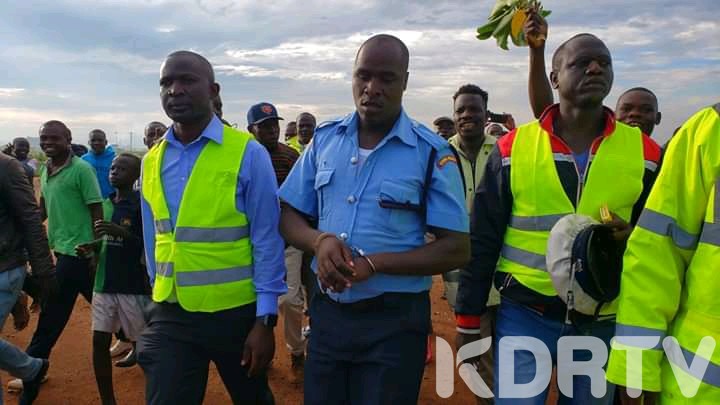 5 Police officers arrested by EAC
(KDRTV News Eldoret)-I’m not a Kenyan police spokesperson nor do I represent anyone in the that office. Anything shared here is purely based on my personal conscience as Sammy Ondimu Ngare  – Askari ni Binadamu
On the allegations (Have no proof it’s true story)
We all saw (a good percentage of Kenyans have access to TV viewership) Purity Mwambia’ story on Citizen TV Kenya  News YESTERDAY.. I mean Everyone.
The #Silaha_mitaani story by Purity mwambi, Was viewed by both young and old, anyone who has access to TV and was watching news. It’s a very chilling story, a story that Sammy Ngare, the father of 3children, doesn’t know how I will sit down and start explaining to my  daughter Gabby, my wife, my dad, my neighbors, my Colleagues, that for sure Askari ni Binadamu.
As I script/pen down my thoughts, I am sure my bosses as well as the CS has already been informed about this scary happenings in our society; which is quite unfortunate.
My 3 questions are….
1-How do I explain to my young girl that those aren’t my colleagues who have allowed themselves to be used of the devil and accept such atrocities as part of their “normal lives?”
2-How do I convince these young generation, who want to continually have confidence in us that they are safe?
3-How do I explain to people and change their perception about Askari Ni Binadamu yet people have always questioned that quote if it’s true that  ASKARI ni binadamu?
Life has a cop has taught me how to live to my Oath of service which I took after graduating from then Administration police College that now called National Police College Embakasi A Campus.
The Men of God minister the oath to us during our graduation and we all swear and commit ourselves before God and the President of our great Nation kenya, to commit ourselves to protect and serve our people; and not to create or inflict harm. I wish my colleagues can remember the seriousness of this oath and the weight that it carries; and above all the repercussions that come with it.
I Sammy Ngare swore to protect Kenyans lives and property and If I happen to go against the oath, I should be ready to pay foe my sins through my generation, the reason as to why I take my oath with all the seriousness that it deserves. I must prove that I am a Police officer who can and should be entrusted with lives of millions of kenyans.
We have a whole generation entrusted in our hands whom we need to protect, beginning with my very own family, young souls who know their dad is a cop and that he serving kenyans; and the story that was highlighted on Citizen was about his fellow officers hiring guns to criminals… what a shame.
I believe and hope that these few rotten individuals will be picked from our midst and be dealt with to ensure the entire force is not affected by the rot.
The guns you hiring to criminals today may come to kill your wife, daughter, dad, mom, cousin, friend, neighbour or colleague one day. And the curse of a life lost, and the innocent blood shed forever be on You, to haunt you forever.
I Sammy Ngare made a promise that as I serve Kenyans, I will not be a part of unnecessary blood shed and loss of innocent lives.
The bible warns us in the book of Luke 3:14…
And the soldiers likewise demanded of him, saying, And what shall we do? And he said to them, Do violence to no man, neither accuse any falsely; and be content with your wages.
May we be content with the little that God had given us.. selfishness and lust for more is what Is causing a few individuals to devalue humanity.
May God forgive us. My heart bleeds. I am totally pained.
MIMI SAMMY NGARE NAAPA YA KWAMBA NITAWAHUDUMIA WAKENYA BILA UBAGUZI, BILA KUWANYANYASA BILA MAPENDELEO, BILA KUWASHTAKI KWA UWONGO NA BILA KUWAITISHA HONGO.. EWE MWENYEZI MUNGU, NISAIDIE..
I remain true to my oath and to my promise.
By Sammy Ngare
Subscribe to watch latests videos
In this article:Kenya police force