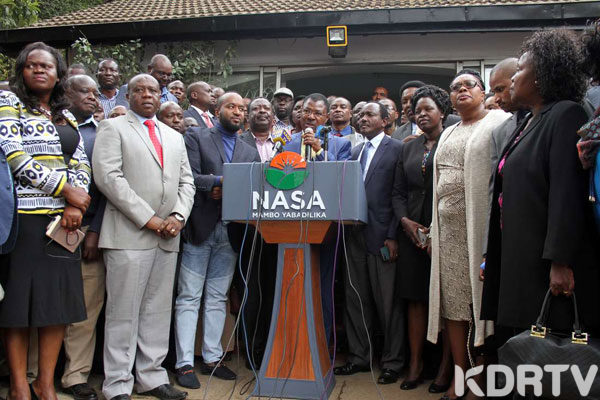 NASA MPs have signed an affidavit in support of Opposition leader Raila Odinga and Kalonzo Musyoka’s swearing-in as the people’s president and deputy president respectively following campaign four MPs had launched earlier to weed out moles and colleagues who were not in support of the swearing-in plan.

Apparently, the four MPs calling themselves Tangaza Msimamo Team, led by Kakamega Senator Cleophas Malala, said they were targeting over 100 lawmakers to make a commitment to support Raila’s swearing-in scheduled for January 30. The legislators, the other three are ODM director of Political Affairs and Ugunja MP Opiyo Wandayi, his Makueni counterpart Dan Maanzo and Nominated MP Godfrey Osotsi, promised to ensure the swearing-in of Raila and Kalonzo does not fail.

According to the affidavit, MPs and senators should acknowledge they understand the Constitution and fully support people’s assemblies. They are also expected recognize Raila and Kalonzo as the president and deputy of the People’s Republic. “I recognize Raila and Kalonzo as president and deputy president of the People’s Republic having been duly elected by the people of Kenya in exercise of their sovereign power granted under the Constitution of Kenya (2010),” part of the affidavit read.

Similarly the affidavit reveals that the servers contained the actual, accurate and final results of the Presidential Elections during the August 8, 2017 showpiece. “Had the IEBC complied with the Supreme Court’s orders and opened the servers, those results would have shown the winner of the presidential election was Raila,” the affidavit says.

On the same note, Malala said they would ask governors and the coalition’s principal to also sign the affidavit after MPs and senators were done, to ensure everyone’s commitment to the plan was absolute. “We want to make sure before we get to the eventual date, we have brought everybody on board. We also want to know who is with us and who is not,” said Malala.

Osotsi insisted loyalty remained key to the success of NASA’s agenda. He said they would ask parties affiliated to NASA to discipline those who do not sign the affidavit and will be accused of failing to support the coalition’s course. “If you are a true NASA supporter and was elected on the same coalition, then you must either toe the line or ship out. There is no two ways about it. It is about time we brought unity and a sense of purpose in parties and coalition,” Osotsi said.

Despite that NASA leadership has insisted that they do not recognise President Uhuru Kenyatta and his deputy William Ruto; last week, Kitutu Chache MP Richard Onyonka differed with NASA and said although they have issues with how the presidential election was handled, President Kenyatta was legally in office. Onyonka said they did not agree with plans by NASA members to swear in Raila and Kalonzo. “Uhuru was sworn in according to the Constitution. I have no problem with those who want Raila as people’s president but I know Uhuru Muigai Kenyatta as president of Kenya,” the MP said.