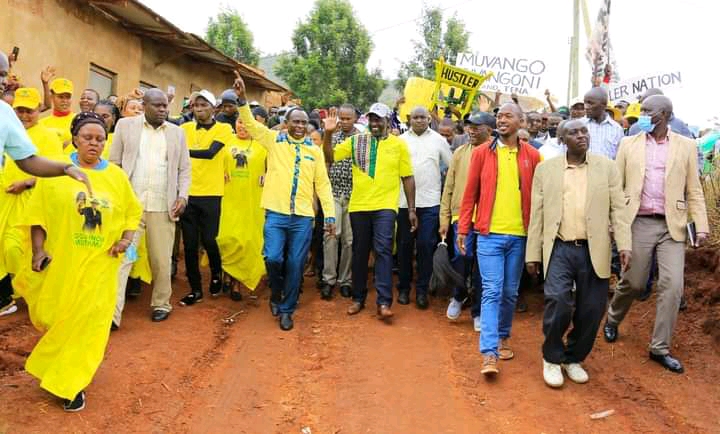 Ruto was flanked with a battery of leaders from the region led by United Democratic Alliance (UDA) chairman Johnson Muthama among other popular and influential grassroots loyalists in Ukambani Region.

The hustler nation president kicked off his two-day tour in the region to plaster and sanitize the Machakos county with yellow colour in the attempts of planting the seeds of bottom-up in electorates’ hearts.

Through donations of simple machines such as Wheelbarrows, car washing machines to jobless youths , financial boost to micro, small and medium enterprises, the bottom up chief crusader DP Ruto believes that the ailing country’s economy will breath life and revive in the next year’s hustler nation government.

Kalonzo represented the country to hold bilateral talks on the resolutions of regional peace on the border of South Sudan.

“Peace in the region is vital for development and growth of our economy hence the high level talks in Kampala on the revitalised agreement of peace in South Sudan” Kalonzo noted.

On the campaign trail, the Orange Democratic Movement (ODM) party leader Raila Odinga is expected to tour Awendo Constituency, Migori County for the official opening of the Kenya Medical Training College (KMTC in the county where he will be hosted by See Ochilo Ayacko.

Raila will later hold sequence of rallies in the county to drum support of the Azimio la Umoja which pitches a ground for unity and peace among Kenyans.