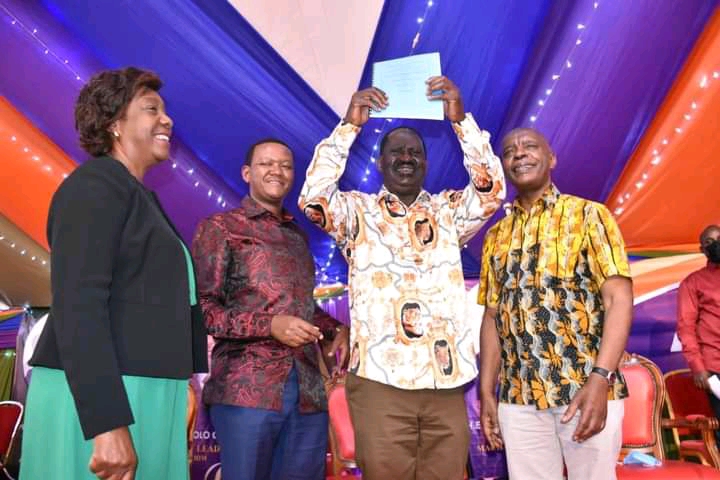 The ODM brigade took the Azimio la Umoja gospel to Wote, Makueni county to preach unity, peace and resounding notable strategies that will tapped into the next government to gear up economic resuscitation plans.

Raila’s 2022 presidential desire has received an acute boost after Governor Kivutha Kibwana alongside Alfred Mutua and Charity Ngilu vowed to throw weight behind his (Raila’s) presidency as they promised to rally all the electorates in the walks of Ukambani to vote for Raila.

Although the former prime minister Raila Odinga is yet to declare his bid, but political lips have it that he will throw his spanners in the works and join the race in Uhuru’s succession puzzle.

This jointly comes a time when the ANC party leader Musalia Mudavadi has been thusly lamenting that the head of state president Uhuru Kenyatta is pilling pressure on One Kenya Alliance partners to drop their respective bids and consider paging a political heavyweight support behind Raila’s bid.

ODM is currently on its baby steps in climbing Mt Kenya and forging support from the rich-vote region ahead of 2022 general election. It is quite noticing that the self proclaimed hustler nation head who started early Campaigns since 2018 seems to be the tall dark suitor proving to enjoy more than 3/4 of the central region support.