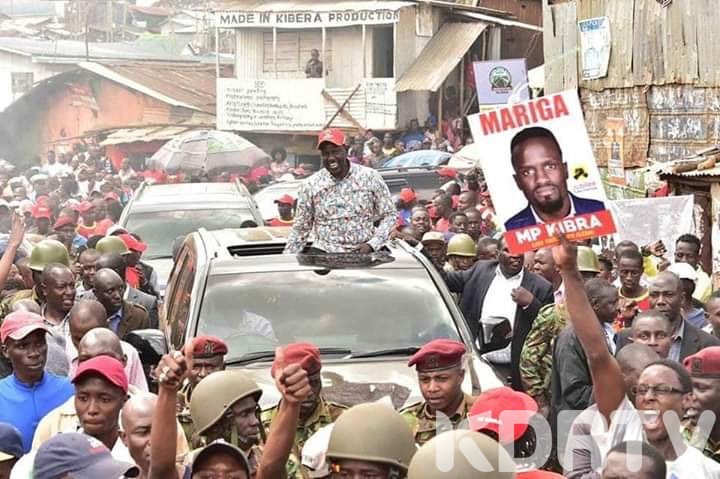 Ruto led campaigns to drum up support for Jubilee candidate MacDonald Mariga at the DC Grounds on Sunday. Jubilee supporters were quick to share pictures of the massive crowd that received the hustler in the slum.

How they enter someone’s bedroom. Fear and armed security all over. BOOM, Kibra is O D M… pic.twitter.com/RoN4ZY8wok

Raila’s party said the DP used heavy security because he feared what might happen to him in Kibra. This is ironical owing to the fact that he has been saying Kibra is not anyone’s bedroom.

ODM’s Director of Communications Phillip Etale also challenged Ruto to repeat the utterances he had said about Raila at a Nakuru Church function on Saturday in Kibra.

Read Also: How Ruto is ‘Bullying’ Raila in His Own Bedroom

During the church function at Salgaa, the DP said things were so thick for Raila in his bedroom that he had to seek the reinforcement from outsiders.

Kibra has a history of hostility towards anyone perceived to be oppossing Baba. Last week, ANC leader Musalia Mudavadi and his candidate were chased from a function. Mariga’s convoy was also pelted with stones last month.

Can William Ruto repeat the things he said in Salgaa on a podium right inside Kibera. Come baby come. Kibra campaigns are done in Kibra 250 Kilometers away. Coward

The Kibra by-elections will be held on Thursday this week. Mariga and Imran Okoth are perceived to be the front runners in the race to replace the late Ken Okoth who succumbed to cancer in July.