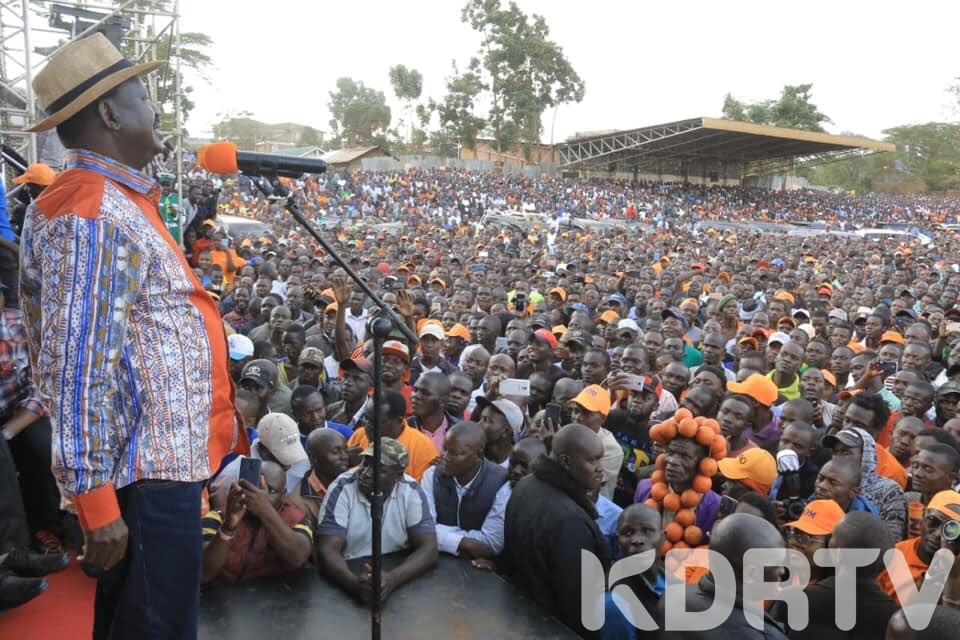 The Kibra by-elections, which are regarded as a dress rehearsal for the 2022 general elections and a possible referendum next year, have narrowed down to a titanic battle between the two political heavyweights.

Kibra was supposed to be a straight win for ODM especially after the handshake between President Uhuru Kenyatta and Raila. It was expected that Jubilee would not field a candidate in the poll with respect to the handshake.

But Ruto ensured the ruling party fielded football star MacDonald Mariga. He also cornered the president to endorse the former Inter Milan Midfielder. Interestingly, it is because of the handshake that Baba is fighting to save the invasion in his bedroom.

Before the famous handshake, Ruto wouldn’t have dared visit Kibra. But the DP has been in the slum constituency three times since Mariga was cleared to vie on a Jubilee ticket.

Read Also: ‘Your Opinion Cannot Control us!’ ODM Fires Back at Ruto

On Sunday, during a rally at DC Grounds, Ruto accused Raila of joining the government but now wants Kibra residents to elect an opposition MP.

“That old man of riddles used a bridge called the handshake and now he is in government. Then he comes to tell you to elect an opposition candidate. Is that not conmanship?” He said.

He also added that Raila was unable to change the face of Kibra for the 25 years despite being an MP, Minister and even Prime Minister.

Read Also: How Ruto is ‘Bullying’ Raila in His Own Bedroom

“The work that has been done in Kibra, was done by Jubilee. If you were unable to change Kibra in 25 years, even if you are given 100 years you won’t change it,” Ruto added.

On Saturday, during a church function at Salgaa in Nakuru County, the DP said was seeking reinforcement from outsiders to help him take care of his bedroom affairs.

“It should be every man for himself in the bedroom. If you see a man asking for reinforcements, things are not going well,”

ODM Candidate Imran Okoth has been branded the handshake candidate, but it is true that without the handshake, there would be no competition in Kibra.