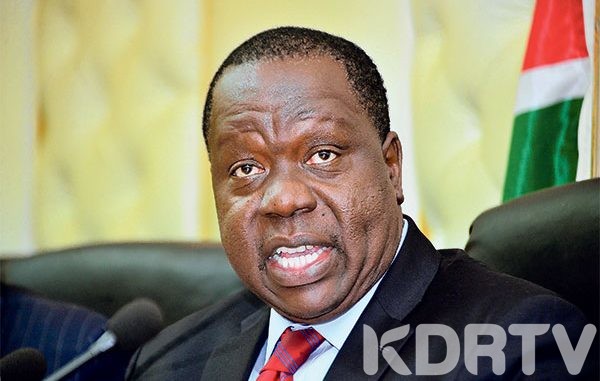 Interior Cabinet Secretary Dr. Fred Matiangi has shot down allegations that the security of Deputy President William Ruto has been withdrawn or downgraded.

Speaking during National Assembly Security Committee on Wednesday, the CS insisted that Ruto is highly guarded.

In fact, according to Matiangí, Ruto is the most guarded VP in Kenyan history compared to all previous vice presidents and even former Prime Minister Raila Odinga.

Matiang’i told the committee that Ruto has a total of 257 officers deployed to guard him as well as secure his residences and properties.

“Contrary to the allegations made and in view of the tabled evidence (annex land 2), H.E. the Deputy President is the most guarded in the history of the country in comparison with previous equivalent office holders,” said Matiang’i.

On the first layer is a total of 85 officers among them 74 officers from the elite Presidential Escort Unit, 5 General Service Unit officers and 6 DCI officers.

READ ALSO: Moses Kuria Says He Won’t Run For Any Political Seat In 2022

The 85 officers, according to Matiang’i, are mandated to provide a 24-hour protection of the DP and are under the command of the a Commissioner of Police.

He said that another 121 officers, who make up the second layer, include officers from the Administration Police Unit and Prison department. They provide a 24-hour mobile patrol within the DP’s residences.

The third layer is known as the auxiliary security and these are security personnel deployed to secure various properties owned by the deputy president.

He went on to compare with his predecessors saying all previous vice presidents had only 14 officers from the Presidential Escort Unit assigned to them yet Ruto has 74.

For the officers guarding residences of previous vice presidents, all of Ruto’s predecessors had between eight to 16 officers assigned to them while Ruto has 183.