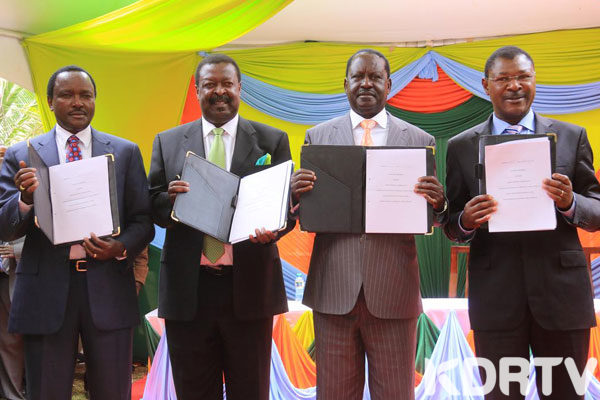 -In the meeting, the principals also agreed to carry on with the planned swearing-in of NASA leader

-US is ready to fund a dialogue between NASA and the ruling party, Jubilee

Reports reaching KDRTV.COM indicates that the principals also had discussions on their compliance to have dialogue with Jubilee about an inclusive government.

According to The Standard , the principals showed that they were ready to dialogue with Jubilee over electoral justice and expansion of the executive after constitutional amendment

This move by NASA principals just showed up a day after the majority leader in the national assembly, Aden Duale indicated that the ruling party was not ready to dialogue on power-sharing but it is willing to have talks about development

A different source also indicates that the leaders didn’t come into consensus about sharing of positions since they were hurrying and thus would discuss the matter later.

On Friday, the principals will be visiting Ukambani for a meeting about people`s assembly to impel for the swearing in plan.

US administration has also revealed that they are ready to fund the dialogue between NASA and Jubilee to see through National Unity.

Political observers also indicated that the act of President Uhuru Kenyatta to partially name the cabinet members may be due to the fact that he would include NASA in the cabinet.