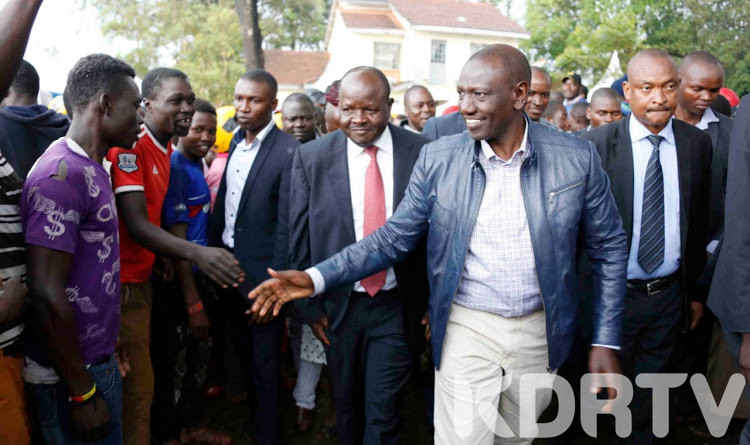 The Deputy President William Ruto has said that his party Jubilee will not have automatic candidates ahead of 2022.

Speaking at the home of Former Kakamega Senator Boni Khalwale, Ruto has said that Jubilee party will adhere to its democratic foundation where candidates will be subjected to free and fair nominations.

According to Ruto, voters hold the responsibility of electing leaders who will represent good leadership and initiate manifestos elected for.

“We embrace democracy and respect the will of the people. We will all compete for different positions in the nominations. There will be no direct ticket in Jubilee Party in all the seats,” said Ruto.

The DP was accompanied by Ikolomani MP Bernard Shinali and Mumias East MP Benjamin Washiali to condole with Khalwale family after the passing of her first wife, Adelaide Khalwale.

Mrs Khalwale succumbed to cancer after on Saturday after a long term battle and ailment.

The DP also narrated that come next year, the party would carry grass root elections pledging democracy through competition of the best man winning.

“As a democratic party, we are open and transparent in the way we carry out our activities. “We are going to have grassroots elections next year to have men and women competent to manage the affairs of our party,” he said.

Ruto said the party was founded on democracy and, therefore, candidates running for various seats would be subjected to free and fair nominations.https://t.co/AJsNMyl4HH

In another account of events, the DP has been on record claiming that he will accept the election results of 2022 as they will come, adding that he was ready to retire together with his President should he lose elections.

He ideally added that the Jubilee party members will have a candid sit-down and make prompt decisions regarding the presidency flag-bearer come 2022 among other elective posts.