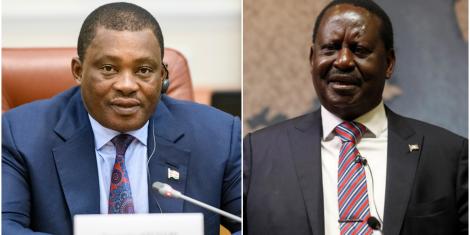 ” These are cheap lies if you like history this much, at least tell the truth and don’t be selective,” he said.

The speaker, who has expressed interest in succeeding retiring President Uhuru Kenyatta in the August 9 General Election, asked the opposition chief to tell Kenyans what he will do for them if he wins.

” I can challenge you. If. If you go to the ministry, you will not find his signature. Stop lying to us and tell the people what you will do,” Muturi added.

Raila made his remarks on Saturday, January 15, at Thika Stadium, when he claimed to be the brains behind the Thika Super Highway.

The former Prime Minister who was speaking while launching his campaign said he advocated for the demolition of people’s homes to make space for the construction of the 50- kilometer road.

“I’m still in the race with a non- tribal party. ” Everyone is welcome in the Democratic Party. It’s been said that the party is tribal. President Kibaki was elected by the same party. ” Stop claiming it’ s tribal, ” Muturi told the DP.