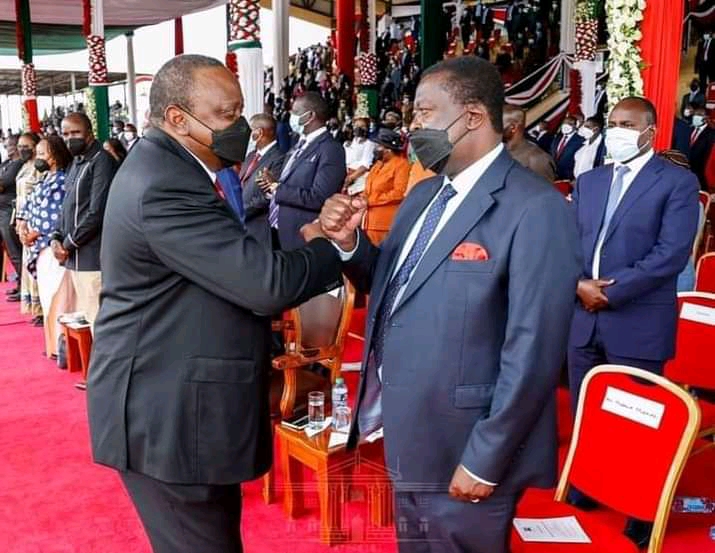 Orange Democratic Movement (ODM) party leader Raila Odinga has revealed how the head of state president Uhuru Kenyatta chipped into action steadily to save him from treason charges following the famous 9th March 2018 swearing in ceremony as the people’s president.

Speaking on Sunday during the holy service at Legio Maria Church in Makongeni, Nairobi, the former premier expressed the solid friendship with his Building Bridges Initiative (BBI) partner President Uhuru Kenyatta by blocking Raila’s arrest plans for unlawfully a grievous offence of swearing in himself as People’s president at Uhuru Park.

“On one side Uhuru was told that Raila was becoming too much, what he has done amounts to treason. Let’s arrest him, take him to court where he will be issued with the death penalty, but Uhuru said No,” Raila said during a church service in Makongeni

Raila’s swearing in ceremony saw a score of NASA allied legislators facing treason charges including MP Kajwang whose case vanished in the air as the controversial former Nairobi gubernatorial aspirant Hon Miguna Miguna’s case thickened. Miguna was unceremoniously deported to Canada and his return to Kenya has been dealt with absurd bumps and hurdles as endless red alerts have been issued blocking his entry into the country.

He (Miguna) has vowed to come jet back into the country with the aid of his lawyers next week to battle out his space in Country’s politics ahead of 2022 general election.

The famous 2017 NASA coalition collapsed after its principals (Mudavadi, Kalonzo, Wetangula and Isaac Ruto) accused the ODM party leader Raila Odinga for allegedly sharing the political parties’ funds unequally, a Moe that raised mistrusts and lose of confidence amongst themselves leading to the disintegration of the coalition.

Although Raila is yet to announce his presidential bid, but the recent political stages have all it takes to remove the doubts that he will be in the ballot in 2022.

‘Stop The Lies. I Prayed For Him First’-Bishop Margaret Wanjiru Calls Out Raila For Getting Saved Again