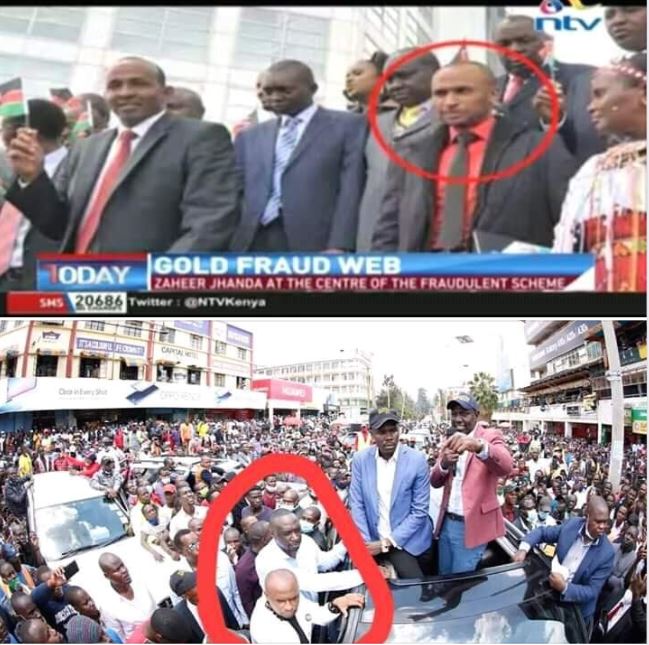 (KDRTV) – One of the politicians that welcomed Ruto in Kisii today was Zahir Jhanda. He is a flamboyant businessman and politician that has contested for the Nyaribari Chache Parliamentary seat twice. He is the guy that was adversely mentioned in a complex gold syndicate last year involving the United Arab Emirates (UAE) Royal Family. He is so well connected in the political sphere, interacting with the who is who in Kenya.

Zahir is known for his lavish lifestyle and he has a taste for the finest things in life. He even attended slain businessman, Kevin Omwenga’s burial in Kisii accompanied by his close friend Don Bosco Gichana.

In the highly talked about fake gold scam last year, the UAE Royal Family was conned a good one. The family demanded a whopping KES 250 million compensation for gold allegedly paid for and seized at the Jomo Kenyatta International Airport. Bungoma Senator Moses Wetangula was also mentioned in the same scam but he refuted the claims. Kapseret Constituency Member of Parliament, Oscar Sudi was also in the mix.

Zahir Jhanda was allegedly the main link to the UAE royal family. He was supposed to serve them at least 23 tonnes of gold but things got sour after he later claimed that the gold had been seized at the JKIA. The UAE even sent their representative, one Ali Zandi to follow up on the matter. Zandi’s only contact in Kenya was alleged to be Senator Wetangula. He was the one supposed to secure the consignment.

The scammers were so well organized that one of the fraudsters masqueraded as Interior CS Fred Matiang’i to get more legitimacy. The UAE wrote a complaint to the CS asking him to release the gold. The scam allegedly angered Uhuru Kenyatta. The DCI detectives started investigating the matter and some people were arrested.

Zahir defended himself aggressively after NTV aired the report that shocked the public. He denied being involved in the scam. The guy loves politics and he is intending to contest again for the Nyaribari Chache parliamentary seat in the 2022 general elections. He is fully behind William Ruto.