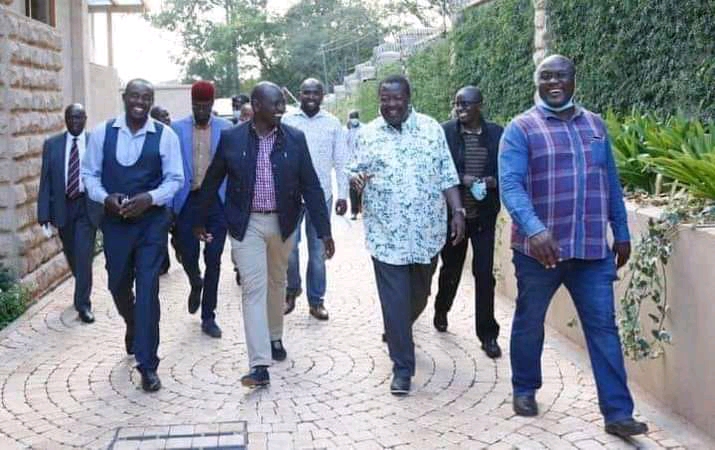 Riding in the hood of populism from president Uhuru Kenyatta’s Mt Kenya rich-vote region, Deputy President William Ruto has now come out to call for coalition arrangements between United Democratic Alliance (UDA) and the other like-minded parties.

DP Ruto opened wide doors in hustler nation camp for pre-election arrangements and frenzy bottom-up economy’s Tangatanga noble idea that seeks to uplift the lives of underprivileged Kenyans and bridge the gap between the rich and the poor through empowerment programs.

Speaking on Sunday in Nakuru County, DP Ruto stated that One Kenya Alliance who are believed to be wobbling their feet under the intense pressure from President Uhuru Kenyatta to support Raila’s bid are at liberty to negotiate with him (DP Ruto) on pre-election agreements that will pull for a formidable UDA-OKA coalition.

“Hustler nation camp is the home of everyone. We welcome all like-minded leaders (indirectly referring to OKA) to come and join us in this journey of changing the lives of our people and form the next government. Don’t bow to unnecessary pressure conditioning you to support a certain candidate” DP Ruto said.

Kiharu MP Ndindi Nyoro urged One Kenya Alliance team to remain resilient and stand their grounds of not dropping their aspirations at the expense of throwing support behind Raila Odinga’s presidency.

“Don’t bow to pressure from Uhuru. Remain firm and stand your ground. Don’t be intimidated and forced to support Raila” Ndindi Nyoro said.

“Allow Kenyans to elect their president without your influence. The politics you are playing right now ended long time ago during the reign of Moi” Gachagua said