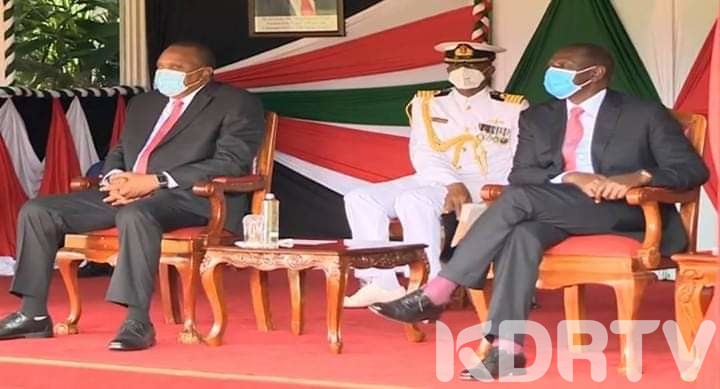 (KDRTV) – President Uhuru Kenyatta has said that he has done more for Kenyans in seven years than what his predecessors did in seven years.

The past Presidents include his father Mzee Jomo Kenyatta, the Late Mzee Daniel Moi and Mwai Kibaki whom he succeeded in 2013.

Uhuru said the three constructed a 11,200 Kilometers of road but he has been constructing an average of 100o Kilometers per year. That translates to four times more than his predecessors.

Yesterday, he said he has built 10,000 kilometres of tarmac roads during his presidency.

That is the distance from Nairobi to Oslo, Norway – by road.

In his speech during the Madaraka Day celebrations on Monday, Uhuru also said that he is proud of the SGR railway. He said his administration has also embarked on reviving the Nairobi-Nanyuki Meter Gauge Railway which will traverse 6 counties and the Naivasha –  Malaba railway which will link the SGR to Uganda.

“Turning to railways now, this is where my biggest critiques reside. But that’s ok, they are not alone, they are in fellowship with the colonizers who called our railway the Lunatic Express,” Uhuru said.

The current Nairobi-Mombasa SGR is operational but it has been making billions of losses every month in cost of operations.

In a previous interview with NTV, Uhuru said that he will be remembered as the first sitting President who had his elections nullified but accepted to go back for a re-run.

“I want it to come to mind that we had a democracy.

I was the first sitting president to have their election win nullified. And I accepted it.

I want to be remembered for the railway too.” – Uhuru Kenyatta#UhurusToughChoices pic.twitter.com/lVbg9sh1zm

The President’s critics claim he did not accept the elections. He went on a rant and promised to revisit the Judiciary for nullifying his win. He also deported lawyer Miguna Miguna.