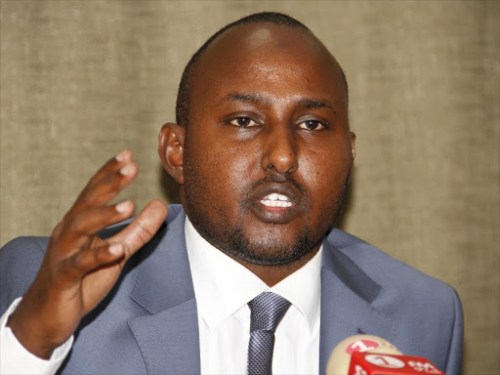 Azimio la Umoja One Kenya Alliance has broken silence on the decision by the IEBC to postpone the gubernatorial elections in Mombasa and Kakamega Counties.

Speaking to the media on Monday night, Junet Mohamed, the secretary-general of the Azimio la Umoja council, referred to the postponement as suspicious and said that they are looking into it.

Junet urged Azimio supporters  in the two areas to come out in numbers and vote for the remaining elective seats, including President, Senator, MP, Woman Representative, and MCA.

“This suspension and it’s intended mischief notwithstanding, we urge Azimio supporters, especially in Mombasa and Kakamega to turn out in large numbers and vote for their favourite presidential candidate Raila Amolo Odinga,” said Mohammed.

“Let us come out and put the commission and their sponsors to shame,” he added.

The Azimio party questioned why the problems on the voting papers that caused the postponement only occurred in Raila Odinga’s core counties.

Junet Mohamed issued a warning to the IEBC commissioners, in accordance with Section 6(j) of the Election Offences Act, that anyone found responsible for the malfunction will be held accountable.

Wafula Chebukati had  stated on Monday that the decision to halt elections in Mombasa and Kakamega counties, as well as Kacheliba and Pokot South seats, was due to incorrect images and information written on the ballots.

He also stated that the commission  will declare the election date before the end of this week.

Also Read: IEBC Sacks 4 Officers in Homabay After Being Found in Meeting With a Politician