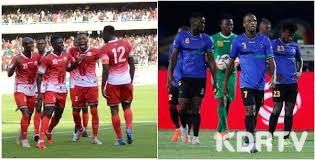 The Kenyan side under coach Sebastien Migne managed to register a 0-0 draw in the away fixture played in Dar es Salaam, leaving the Taifa Stars with a tough task in the return leg in Nairobi on August 4.

the inexperienced side at the international stage, ensured the Harambee Stars kept a slim advantage ahead of the second leg to be staged in Nairobi next weekend.

Stars will need any kind of win in the return tie in Nairobi to progress to the second and final qualification against Sudan round while a 0-0 draw will send the game to penalties.

We came here with a very depleted squad, a team that was very young and getting a draw is good for us,” Kenya captain Odhiambo said in an interview after the match.

The Kariobangi sharks keeper John Oyemba kept his side in the game after pulling off a number of saves to deny the Tanzanian side an advantage.

The second  leg will take place at Moi Stadium, Kasarani on Sunday, with ticket prices going at Ksh 100.