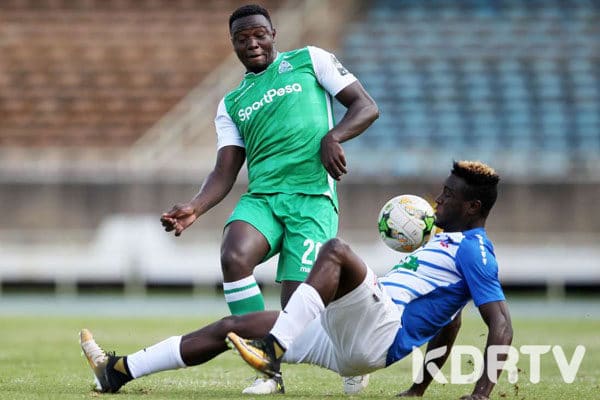 Kenyan champions Gor Mahia having having won all their 3 group stage matches, have been tossed out after their quarter-final match at the Cecafa Kagame Cup after falling 2-1 to Green Eagles from Zambia at the Nyamirambo Stadium,Kigali Rwanda.

Seeking a 4th CECAFA title, K’Ogalo started the match in the right foot, as Nicholas Kipkirui nodded the ball to give Gor the lead barely two minutes into the game but the Zambians reacted through  Tapson Kaseba’s strike scoring the leveler in the seventh minute.

Hassan Oktay’s men went close to restoring their lead in the second half as Kipkirui was put through, one on one with the keeper but failed to capitalize on the chance. Eagles turned the tables as Shadreck Mulungwe scored the second for the Zambian side, a goal which was enough to see the Green Army beaten.

The Kenyan champions finished on top of Group D with nine points after registering a slim 1-0 win over a 10-man Kikosi Maalum Cha Kuzuia Magendo (KMKM) from Zanzibar on Sunday at Stade Umuganda in Rubavu District.

(KDRTV) – Director of Criminal Investigations (DCI) has summoned Ex-Nairobi Governor Mike Sonko over his recent utterances. Sonko is to appear appear at DCI...

Mt. Kenya politicians have come out explicitly to ditch Raila Odinga ahead of 2022 general elections

(KDRTV) – The Wheelbarrow Party has switched its focus to Machakos County where it aims to battle regional political kingpin Kalonzo Musyoka in the...