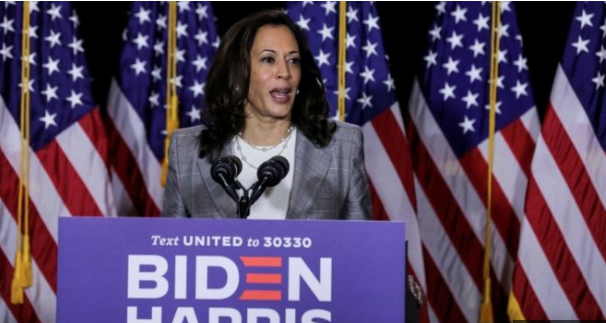 President Donald Trump has been censured again after he said he heard that Democratic running mate Kamala Harris “doesn’t qualify ” to serve as the US Vice-President, something that has kindled experts’ cry for battle again racism.

KDRTV understands that Ms. Harris was born to a Jamaican father and Indian mother in Oakland, California, on 20 October 1964.

However, reports registered that conservative law professor has  criticized her eligibility for the position

Read also: Joe Biden Boxes Trump into the Corner as he picks Kamala Harris as his choice for VP

Ms. Harris who is a California senator was appointed on Tuesday as the first woman of color to serve as a running mate on the main party in the US presidential ticket.

Ms. Harris is a running mate to Democratic White House candidate Joe Biden, who will confront Trump in the coming general elections in November

During a presser on Thursday president, Trump asked to find out about the argument about the eligibility for Ms. Harris

“I just heard it today that she doesn’t meet the requirements and by the way, the lawyer that wrote that piece is a very highly qualified, very talented lawyer,” said Trump.

The conservative law Prof. Eastman refers to Article II of the US constitution which says  “no person except a natural-born citizen… shall be eligible to the office of President”.

However, other law experts have referred to Prof. Eastman`s argument as truly silly citing that the US court has maintained that Kamala has been the US citizen 1890s.

“The Supreme Court has held this since the 1890s. Kamala Harris was born in the United States,” read mail from Erwin Chemerinsky, the dean of Berkeley Law School

President Trump`s move to question the eligibility for Ms. Harris to be the vice president of the US has sparked controversies on where he promotes racism or not.