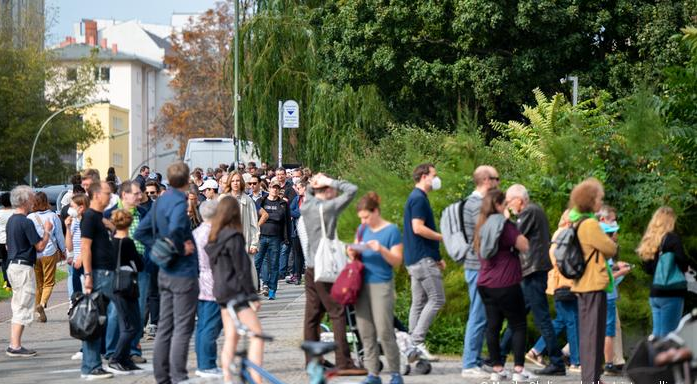 German readying themselves to vote in the parliamentary elections

KDRTV NEWS: There are about 60 million eligible voters in Germany that will be in parliamentary elections in the country.

Thereafter, the winning lawmakers will set their country on a new political course by deciding who will replace the country`s outgoing and prominent chancellor, Angela Merkel.

Therefore, it is expected to take some weeks before the country would announce the person who will succeed Angela Merkel.

Germans are celebrating Merkel as the mastermind behind Germany`s economic position in Europe.

A bit of a line outside this polling station in Berlin Friedrichshain.

On top of these in-person votes, a record number of postal ballots is expected this year. Election authorities expect upwards of 40% of votes to be cast by mail. #btw21 pic.twitter.com/yzb3Eowp0g

Merkel is going out of power after having served 16 years in the government’s top position through her Center-Right Christian Democratic Union.

The Chancellor has been playing low on supporting any of the leaders fighting to replace including her vice-chancellor Olaf Scholz from the Social Democratic Party.

However, he was seen attending a rally for the Laschet leader of the Christians Democrats.

So far, KDRTV has established that The Green Party, SPD, and CDU candidates have cast their ballots

KDRTV correspondent in Europe has said that the SPD`s candidate Scholz is in a better position and is facing stiff competition from CDU`s Laschet.