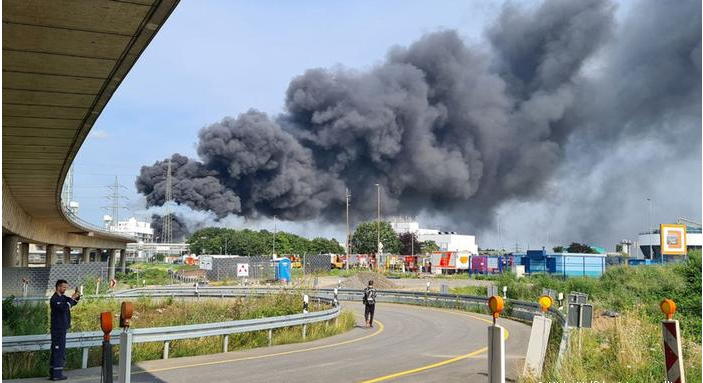 KDRTV NEWS: One person has been confirmed dead while four unaccounted for as explosion hits an industrial park housing numerous chemical companies in Germany`s western city of Leverkusen.

The industrial park is housing Bayer and Lanxess chemical companies, among others.

The explosion sent a black cloud of smoke into the air and sparked the fire; however, authorities later managed to extinguish the fire.

According to reports by authorities in Leverkusen city, the explosion occurred in the storage tanks for solvents.

So far, official reports indicate that 16 people were injured during the incident. However, four sustained severe injuries.

“We are deeply concerned about this tragic accident and the death of our employee,” the head of Chempark, Lars Friedrich, said in a written statement.

Disaster management authorities had urged the people to take measures by sheltering inside their houses with doors and windows closed.

Germany’s Federal Office for Civil Protection and Disaster Assistance classified the explosion as “an extreme threat,” according to Germany’s DPA news agency.

According to residents, the blast could be heard from some distance.

The police in Cologne have reported that several motorways will be closed following major damage.

It was not immediately clear what caused the explosion in an industrial park that houses several chemical companies.

KDRTV established that emergency officers, helicopters, and ambulances had been deployed to the scene.

At the same time, authorities have downplayed the possibility of the explosion causing air pollution.