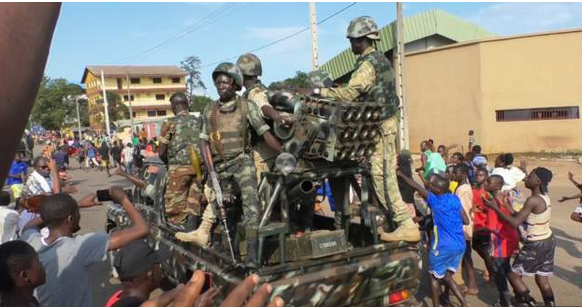 Civilians cheer the coupl soldiedrs in Conakry
05:53 AM (CONAKRY)

KDRTV NEWS: The Guinea coup leaders have ordered government ministers and other national figures to meet on Monday.

The coup military said that anybody who will miss the meeting would be considered a rebel.

On a televised statement, the soldiers said that military commanders have replaced the regional governors and that the ousted president was safe but is being detained.

The UN Secretary-General had condemned the coup and called for the immediate release of the President unconditionally.

I am personally following the situation in Guinea very closely. I strongly condemn any takeover of the government by force of the gun and call for the immediate release of President Alpha Conde.

At the same time, the African Union and the US have also condemned the coup and detention of President Alpha Conde.

However, the head of the Special Forces, Colonel Mamady Doumbuoya, who led the coup, said they took the approach to end rampant corruption and mismanagement in the country.