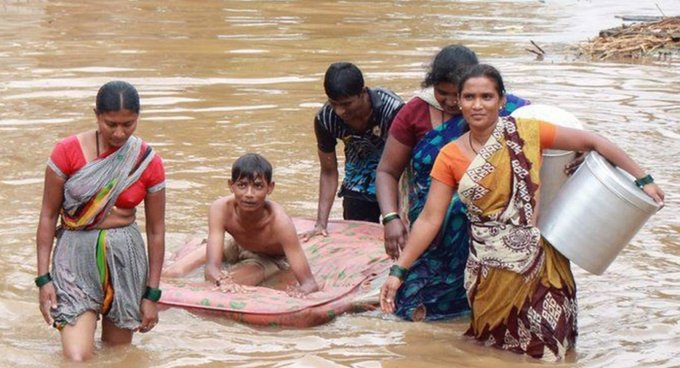 Residents have joined the rescue operation after residents

Several houses were washed away, and many people became trapped in the district of Kottayam.

KRDTV has seen a video showing a passenger bus rescued after it was inundated with floodwater.

KDRTV has also established that days of heavy rainfall in Kerala has caused a deadly landslide.

Helicopters have been used in the operations to fly various products of humanitarian assistance to various victims of the the incdent.

The helicopters were also used to rescue people trapped during the flood.

Indian Air Force medium lift helicopters have been inducted for #floodrelief efforts in districts of #Kerala inundated due to heavy rains.#HarKaamDeshKeNaam pic.twitter.com/ZcwZRKyYZR

In one tragic incident, a family of six all were confirmed dead after their home in Kottayyn was swept away.

Dozen of bodies have been recovered from the indicident.

Rescue operation have been enahced as the resident also put wirhgt behind the rescues.

In 2018, more than 400 people died and more than one million people were displaced by the worst flooding in Kerala.

The state is considered to be most vaunerable because it is surrounded by 44 rivers.