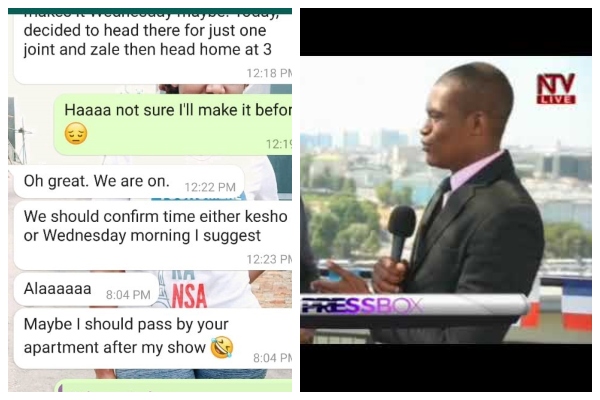 Popular NTV Sports journalist Andrew Kabuura is on spot for cheating on his wife Flavia Tumusiime.

The Journalist, who works for NTV Uganda, was exposed for cheating on his wife with French Embassy worker Mercy Twinomujuni.

The chats on Whatsapp were leaked on social media, showing the two enjoyed a very steamy conversation.

In the leaked private chats, the journalist chats in Germany and French. They then switch to English and even Swahili.

Andrew Kabura and His Wife Flavia

Mercy, who also sent him photos of her thighs in the chat, is allegedly married to a youth pastor — Philip Tumwebaze– who is based in France.

In 2019, Kabuura and Tumusiime legalized their relationship as they walked down the aisle at All Saints Church in Nakasero, Kampala.

The two were also rumoured to have broken up last year but it seems they worked on their marriage.

They have not addressed the cheating rumours yet, choosing to ignore everything that’s being said on social media.