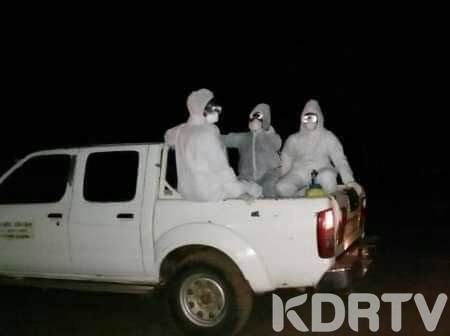 Governor Rasanga, who spoke to Radio Ramogi, disclosed that the decision was arrived at without consultation with his committee and that they were only made aware of the Ukwala burial on Sunday at 4 pm.

Read also: Positive Cases Of Coronavirus Have Risen To 208, 1-yeard-old Among New Patients

According to the county chief, once the family members are out of the quarantine, he will help them perform the final burial

Until his death, James Oyugi was an employee of the Kenya Ports Authority (KPA) in Mombasa and is alleged to have died on April 10, of coronavirus

Reports indicate the remain was disinfected on the same day and then buried at around 2.30 am on Sartuday

The footage of the worrying burial which showed three officers in protective gear carrying a body bag out of a pick-up vehicle, caused an uproar on social media with a section of Kenyan faulting the officers for ‘inhumane’ send-off

1. Arrival of the Body disposal team

2. The staff should not be wearing PPE upon arrival.

3. Greet the family and offer your condolences before unloading the necessary material from the vehicles. Request respectfully for a family representative.

4. The communicator should liaise with the family representative for the final rites

5. Before handling the remains, health officials will be required to be in protective gear and will spray the body before placing it in the appropriate body bag.

6. If a coffin is necessary, it will be placed outside the house, and then the  body will be placed by health officials in full protective equipment.

7. A family representative in gloves will then be allowed to close the coffin after which it will be disinfected. The body will then be interred.

8. After the burial, health officials will disinfect rooms, clothes or other items that the deceased may have used or interacted with before they leave the home.