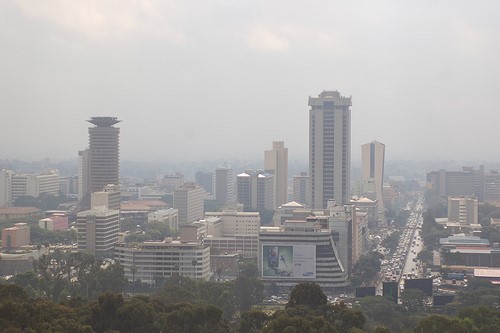 Doctors and air pollution researchers in Kenya are calling on National and County governments to deal urgently with metropolitan air pollution.

The two levels of government should set up regional hospitals to address the rising issue of respiratory diseases infections.

Machakos and Kajiado counties are some of the counties that need the facilities, to address day-to-day rising incidences of respiratory-related illnesses.

The researching team reported deplorable learning and living conditions of school-going children and residents within Mlolongo, Mavoko, Athi-River and Kitengela in Machakos and neighbouring Kajiado County.

“People are in danger of suffering pulmonary and respiratory diseases within these areas because of constantly inhaling air pollutants from billowing dust and industrial chemicals. If constructed, the medical unit would address increasing cases of respiratory infections within the two counties and areas within Nairobi metropolitan,” says the report. 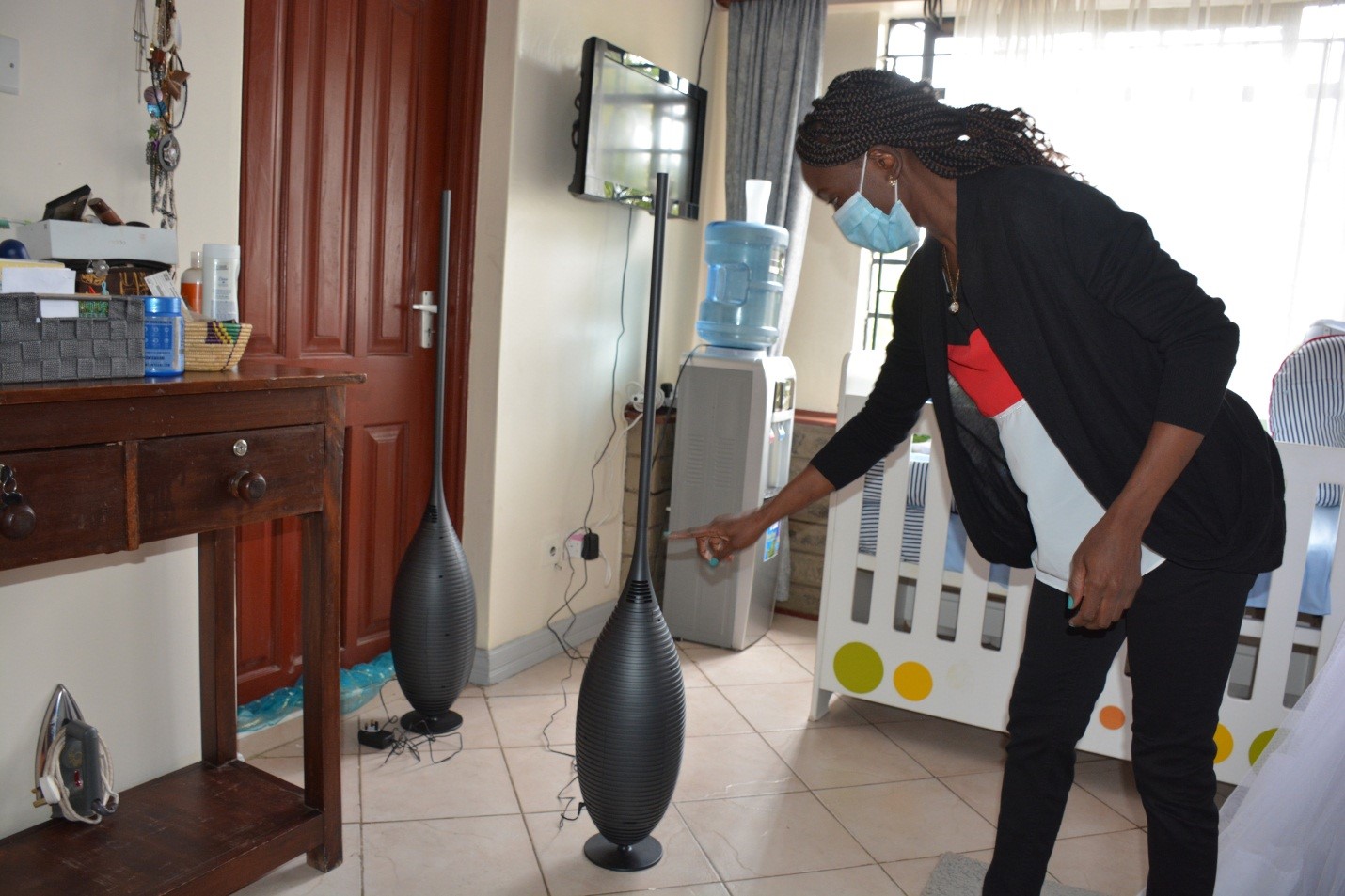 A resident of an estate along Nairobi’s Mombasa Road showing air purifiers she bought to filter air pollutants.

Dr. Faridah Were, leader of the research team and a lecturer, Chemistry Department, University of Nairobi’s College of Biological and Physical Sciences, explains that children and adults within the dusty and industrial parks were constantly reporting respiratory infections. The cases are due to exposure to industrial pollutants at school environment, home and in the open environment.

In one of the visits to Mavoko Primary School in Athi-River Sub-County, Machakos County, the researchers learned that studying is often disrupted as children, teachers and support staff frequent nearby health facilities. They are diagnosed with respiratory infections such as pneumonia, asthma, coughs, flu and voice loss. They also suffer from watery, red and itchy eyes.

Mavoko Primary School with primary and a pre-school unit has 1,500 students, 30 teaching staff and three support staff. Consequently, this leads to poor classwork which affects the school performance.

“As a mother, I was personally touched when I met small children and the pathetic environment they were learning from. After our research we pledged to mobilise the local leaders, industrial operators and professionals with different expertise to help the community escape the danger of the rampant air pollution. As soon as the Covid-19 ban on public gathering is over, we will arrange a meeting,” Dr Were says.

Dr Were laments that most families are living within areas without ground cover vegetation and in poorly ventilated homes where the main source of fuel is either paraffin or charcoal, both of which are fossil fuels, thus aggravating the situation.

A resident of an estate along Nairobi’s Mombasa Road showing air purifiers she bought to filter air pollutants.

In addition, schools, estates and commercial facilities were in close proximity to the unpaved roads and the Mombasa highway characterized by heavy traffic that stirred off settled particles, contributing significantly to inhalable pollutants.

Dry sweeping of classrooms especially, overcrowding and playing activities influenced the re-suspension of settled dust. Further, rampant open burning of solid waste including plastic bags is exposing both residents and workers to vulnerability of respiratory diseases and even cancer.

The research was conducted in two intervals, during the rainy and dry seasons in 2018 and 2019. “In both cases, we found out that the residents were exposed to the inhalable PM2.5 and PM10 particulate matter, which is usually suspended in the air and is association with cardiovascular diseases, respiratory infections and cancer. The daily concentration in the air of the two types of particulate matter was above World Health Organization (WHO) recommended concentration of 25mg/m3 and 50mg/m3 respectively.”

The researchers recommend that the Ministry of Health should establish a public health facility in Athi-River Sub-County specialized in monitoring cardiopulmonary diseases, to perform functions such as medical monitoring referrals and training for individual and community empowerment.

Ministry of Environment should consider installing a system to monitor inhalable dust among other pollutants. It should enforce laws that require operating industries to have adequate emission controls as adherence to emission regulations. The Kenya Forestry Research Institute and Kenya Forestry Service should encourage and support planting of suitable cover grass and vegetation that are tolerant to arid and semi-arid conditions and polluted grounds. This will reduce dust billowing from the ground and control wind movement.

As for the Energy Ministry, it should role down programs to support clean energy such as community solar systems, energy-saving stoves and subsidized LPG services especially for the low-income households.

On its part, Education Ministry through corporate social responsibility should ensure that school buildings that are near industries and factories are well-equipped with efficient and continuously functioning dust capturing devices. The play grounds should also be paved and bare grounds covered with suitable grass and vegetation. Wet dusting of the classrooms should be encouraged to reduce dust billowing in the air.

Planners should have adequate green-belts zoning system of designing towns, industries as well as the estates where people live. Learning and social amenity facilities located in close proximity to sources of pollution should be redesigned to prevent mass populations from being exposed to inhalable dust and other pollutants. During a fact finding mission at the Mavoko medical center, a Machakos sub county medical facility within Athi-River town, tens of young mothers with infants had come for attendance at the facility. “I have brought my three-year-old daughter to be attended to because she has been experiencing a persistent cough. Many of us have to seek permission from our casual employment to come and see the doctor,” said Ann Mwatha.

A medical officer who declined to be named, explained that medical personnel took part in the research to demonstrate that there is a link between the diseases they were treating at a small facility where they are stationed, and the environment. “This pollution does not discriminate between a child from a poor family and a chief executive officer whose factory might refuse to implement air pollution safety measures within where he or she works,” the doctor warned.

Stockholm Environment Institute (SEI) Africa Centre Director Dr. Philip Osano, explains that solving the problem of pollution within the metropolitan zones will need a collective action plan based on an elaborate strategy.  SEI has been researching on air quality and air pollution within the region. “To solve the air pollution problem within African cities and major towns needs the involvement of technical experts. They can identify the needs of public and private sectors and the challenges facing the nearby community due to pollution, hence being able to suggest ways that can be applied to resolve such conflicts, preventing the problem from recurring.”

However, Dr. Osano states that Africa needs to invest substantially in air quality and health information, to build the capacity for evidence-based solutions to curb air pollution menace. Institutional arrangements for air quality management are not always clear. Thus, mapping key stakeholders and understanding their roles and functions is the starting point.

Subscribe to watch latests videos
In this article:Air pollution Kenya