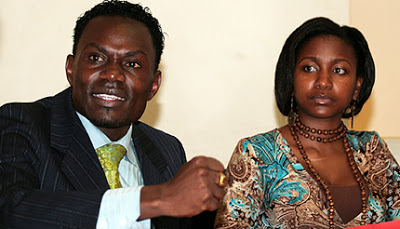 (KDRTV)-Esther Arunga was a darling to many Kenyans in her days as the topmost talented and beautiful news anchor.

When she emerged at KTN, everybody loved to watch this new hot and young girl that had already mastered her craft in the short stint she had on Television.

Esther is a trained lawyer and alumni of Kenya high school but she indulged herself in activities and people whom she thought had her best interest at heart but ruined her flourishing career.

Joseph Hellon and his friend Quincy Timberlake came into her life and they brainwashed her and she resigned from her lucrative job at KTN and relocated to Austria.

Joseph Hellon was a pastor at the finger of god church that most Kenyans doubted to be a cult-like sect due to their ideals and beliefs.

Esther and Quincy got married and they were blessed with a son called Sinclair Timberlake. The once bubbly girl that every man and woman admired looked dejected and lost.

Her son died under unclear circumstances but she later admitted to investigators that she lied about the death of her son to protect Quincy from being jailed.

Esther was jailed for 10 months on parole in 2019. Parole means the temporary or permanent release of a prisoner before the expiry of a sentence, on the promise of good behavior.

Esther made a comeback to social media back in January and she has now asked Kenyans for forgiveness through her official twitter account about 12 hours ago.

She acknowledged that her life took a bad hit and she has suffered a lot and she is coming back to Kenya for a fresh start. Esther announced that her parole is over and she is not ashamed to start afresh.

Kenyans on twitter sympathized with her and welcomed her back. Journalist Abby Agina was one of the notable media personalities to give her a word of encouragement and best wishes as she takes steps to reorganize her life and start again. 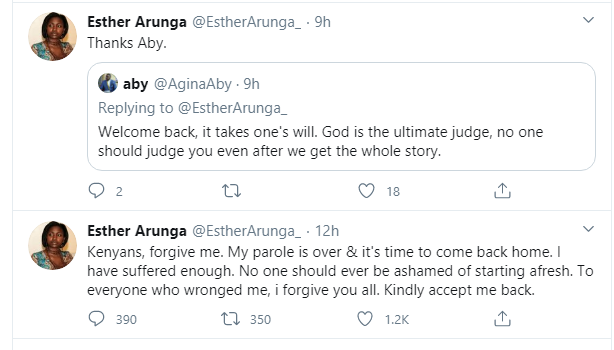