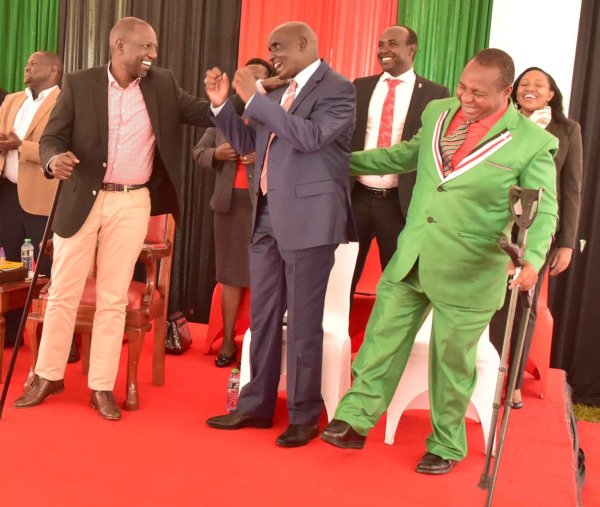 (KDRTV) – It looks like we are starting to experience political realignments as the 2022 campaigns have kicked off regardless of the COVID-19 situation. Kenya’s second in command, Dr. William Ruto has once again managed to win the heart of one of his former allies who ditched his Tangatanga team back in May this year for the handshake team.

During that time, the nominated Member of Parliament from Narok County, David Ole Sankok, declared his unwavering support for President Uhuru Kenyatta to the extent of even changing his Facebook page profile picture to be that of the son of Jomo.

His then move caught many Kenyans by surprise since the guy who was nominated to represent a special interest group, the disabled, had been very vocal with his support for William Ruto.

It is now clear that his move was a result of fear of being kicked out of his position as a nominated member of parliament. It is around that time that many legislators that held senior positions in parliament and the senate were kicked out in what was perceived as punishment for being ant-BBI and anti-handshake. Kipchumba Murkomen and his counterpart Aden Duale were the biggest casualties.

During yesterday’s prayer ceremony that was hosted by the Deputy President where a number of political leaders and members of the clergy from Narok attended, the nominated MP David Ole Sankok was also conspicuously present. In politics, there are no coincidences. The guy was joined by outspoken Aisha Jumwa of Malindi, Ndindi Nyoro of Kiharu Constituency among many other politicians from Narok County.

It is possible that the lawmaker has completely switched back to William Ruto’s Tangatanga camp. He may have just followed Millicent Omanga’s tactics of escaping the Ouster by pretending to be with President Uhuru Kenyatta momentarily only to switch back to DP Ruto’s team after making sure their jobs are intact.