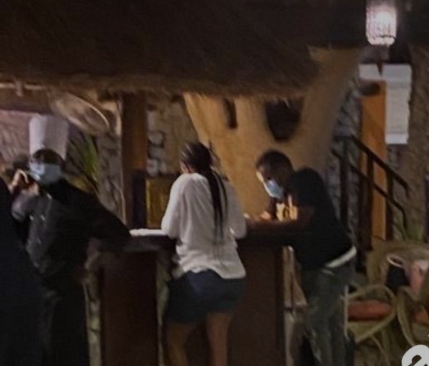 Socialite Amber Ray and Jimal Roho Safi, who recently announced they are no longer an item, were spotted getting cosy in Mombasa.

The two were seen at a popular hotel in Mombasa trying to pay for a room. They were exposed by a fan who secretly recorded them and shared on blogger’s Edgar Obare Instagram page.

The expose comes just hours after Jimal took to social media to confess that he was missing Amber Ray despite the drama she came with to his life.

Amber Ray has also shared several videos on her Instagram page showing that she’s in Mombasa eating life with a big spoon.

Early last month, Jimal was forced to dump the socialite as a second wife and went back to his first wife Amira.

According to sources, Jimal was forced by elders in his community to dump Amber Ray and return to the mother of his kids because of the controversies surrounding their marriage.

The source further claimed that elders were not impressed by how the two wives have been publicly clashing putting Jimal in very awkward positions.

The businessman was even forced to publicly confess that he wasn’t broke and was just servicing a loan of Ksh 300 million after Amira accused him of using loans to entertain Amber Ray.