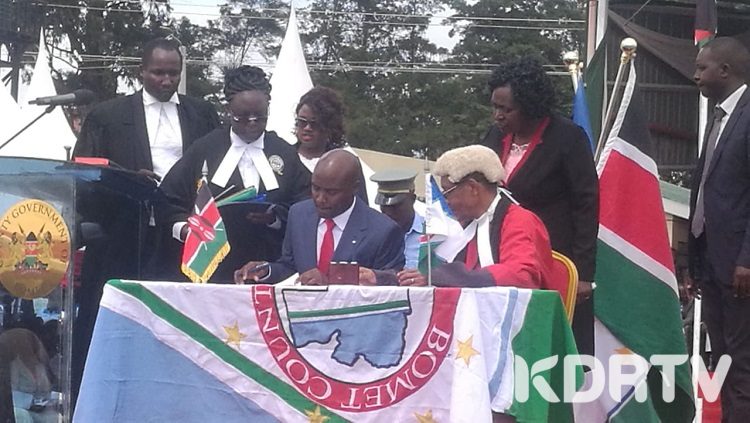 Bomet County Deputy Governor Hillary Barchok has been sworn in as the New County Governor after Laboso’s demise.

The new governor was sworn in earlier today in a ceremony graced by Deputy President William Ruto as the chief guest.

The Governor’s seat fell vacant after Joyce Laboso succumbed to Cancer at Nairobi Hospital barely a week ago.

The rallies behind her death saw to it that other women leaders advocated for a female deputy governor to fit in the position.

“There is no contestation about you taking over…You have our support as a family.”

According to the Kenyan constitution, when the Governor dies, the deputy takes over the position in managing and running the affairs of the County.

This constitutional practice was also witnessed when Nyeri Governor Gakuru died via a tragic road accident.

The Deputy Governor took over and appointed a new deputy governor to aid in running county affairs.

The former deceased Governor was a female, which prompted most of women leaders to rally for a female deputy governor in honor of her legacy.

During the memorial service for the late Governor, Kirinyaga Governor Anne Waiguru requested the President together with the deputy governor to consider appointing a female deputy governor.

HILLARY BARCHOK sworn in as the third governor of Bomet following the death of Joyce Laboso in an event attended by DP William Ruto. pic.twitter.com/qgSWpTBYUv

The ceremony was short and quick, detailing the constitutional swearing in and mandate where the Governor upheld the rule of law by accepting the position and promising to abide by the constitution in delivering service to the people of Bomet County.