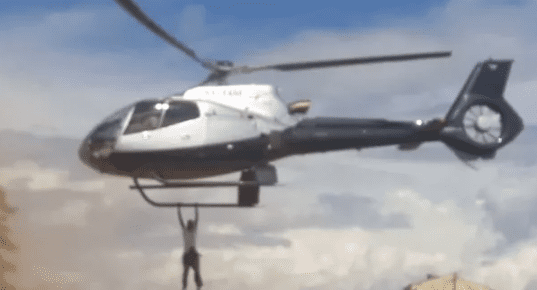 Sale Wanjala alias Kenyas James Bond hangs on a helicopter in 2016 during the funeral of businessman Jacob Juma. PhotoFile

(KDRTV) – A Bungoma man who shot to fame after hanging on a helicopter in 2016 has died after a long illness, his family has confirmed.

Saleh Wanjala, who was later nicknamed James Bond due to his theatrics, died at the Bungoma County Referral Hospital where he was battling an unknown illness.

“He was found unconscious in his house and then taken to the hospital where he was later pronounced dead,” a family member said.

Saleh made headlines in May 2016 when he hung on a helicopter that was transporting the body of the late businessman Jacob Juma. The chopper had made a short stop at Posta grounds in Bungoma town for mourners to view Juma’s body before it could be taken to his home in Bumula.

He jumped off the plane a few kilometers away at the Bungoma Airstrip as the pilot attempted to land. He was arrested and charged with endangering his life but was released later.

A few months later, controversial Bungoma businessman Henry Waswa fulfilled his dream by purchasing a plane ticket for Saleh and 11 members of his family to fly to Nairobi. The trip included Saleh’s father and wife.

Family members say Saleh has been living in abject poverty despite flying on a plane and the fame that came with his James bond theatrics.