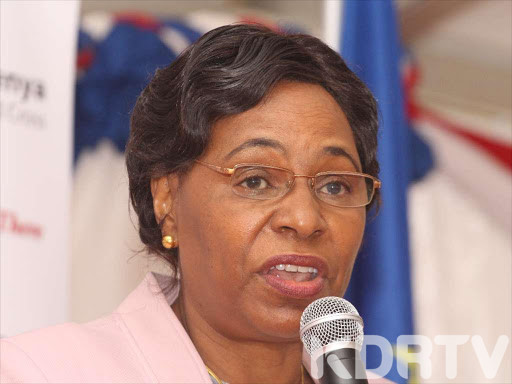 (KDRTV) – Gender CS Margaret Kobia has found herself in trouble with Kenyans on Twitter (KoT) after claiming that embattled Kirinyaga Governor Anne Waiguru was impeached because of her strong leadership.

23 MCAs voted to impeach Waiguru on Tuesday over what they termed as gross violation of the constitution and misuse of office. Her fate now lies in the Senate.

“It is unfortunate that Governor Anne Waiguru’s term is being cut short by an impeachment. This is an indication that some of us do not value strong women leadership,” reads part of the statement.

She further questioned the timing of the impeachment motion, saying that it comes at a period when the COVID-19 pandemic in negatively affecting the socio-economic development of the country,

However, Kenyans could not agree with this statement and told the CS that Waiguru was not impeached because she is a woman but due to her incompetence.

LSK President Nelson Havi told Kobia that elected leaders are evaluated on their performance, not gender.

“Good morning Prof. The distinguished Governor was elected by popular vote; not affirmative action. Elected leaders are evaluated on meritocracy and performance,” Havi said in a statement shared on Twitter.

The other hard question, which the CS may not be able to answer any time soon is why Waiguru? There have been other women leaders ejected from leadership. We can start with the dramatic ouster of Nakuru Senator Susan Kihika as Senate Majority Whip. The same fate befell Cecily Mbarire who was ejected from her position as Majority Deputy Whip in the National Assembly.

Kobia and her fellow women crusaders did not speak about these ills. Were they not women?

Governor Anne Waiguru was impeached not because she is a woman but because she clearly is incompetent and lacks accountability. Can you all female politicians stop this nonesense of insinuating that she was impeached for being a woman. Mts! Let her do something else like Waititu.