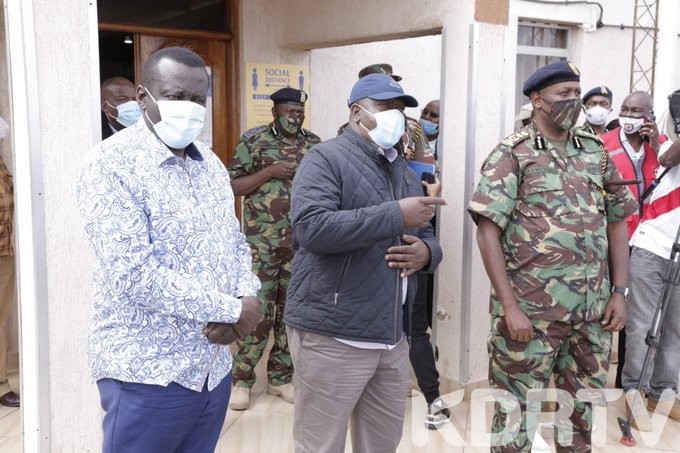 However, the CS regretted dialogue was not the best strategy so far saying that mediation has left the Ministry of Interior bleeding and mourning colleagues

“That part of the country has caused us several public officials and the ministry of interior has paid the highest price while trying to find lasting peace to the conflict around Marsabit.

That is how we lost an assistant minister, several Members of Parliament, two county commissioners, regional commissioner and senior police officers,” he said adding that the government will no longer be lenient to perpetrators and masterminds.

I am concerned by the number of public officials we have lost because of the conflict around Marsabit area. We are now increasingly convinced that we need to change our doctrine of internal security in that particular part of the country. pic.twitter.com/ibePpviiDm

The CS made the statement while he received six security officers who sustained injuries after the police helicopter they were traveling in crashed in Meru.

Received injured officers, from the Meru crash landing accident, at the Wilson Airport. All are part of Eastern Regional Security team led by Commissioner Isaiah Nakoru — who was critically injured but now stabilising. The other four are in stable condition with minor injuries. pic.twitter.com/BBCwBAk3UY

However, Dr. Matiang`i stated that politicians in north eastern have greatly contributed to the ongoing conflicts in the area

“We recently had a challenge along the Nakuru-Narok border and the leaders called their people and solved the matter.

We also had a conflict along the border between West Pokot and Elgeyo-Marakwet but elected leaders and residents have quietly worked up solutions using local systems of government,” said Matiang’i.

I joined the CS Interior Dr @FredMatiangi together with fellow leaders of @NPSOfficial_KE as we received our officers who were in the ill-fated chopper that crashed earlier today. All of them are safe and will have further specialist check ups. I wish them a quick recovery. pic.twitter.com/6o74kPcGG9

Eastern regional security chiefs injured in the Meru police chopper crash. They were headed for a meeting in Marsabit. They are all in stable condition in hospital to be airlifted to Nairobi later. pic.twitter.com/VyFpLKdgR0