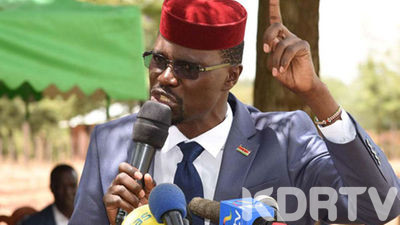 Kimilili MP Didmus Barasa was kicked out of the army following his unexpected deed to help colleagues.

The MP, while speaking the burial of the late Senior Sergeant Stephen Omaran Omale at Chebukwabi village of Kibingei Ward in Kimilili Constituency, revealed that he was fired from the Kenyan Airforce because he went out of his way and against his bosses to help his close colleague get loans.

“Interestingly, the person who got me in trouble to the point of being fired from the Air Force is this Stephen and his friends,” he told mourners.

“Back then while working with Stephen and others in the Kenya Air Force, I was somehow a superior to them and since I was also good in English, they used to send me to our boss whenever they needed something.

“So one day, the new Kenya Air Force officers wanted to get loans to develop themselves but since the then Commanding Officer had ruled out new recruits getting loans, they requested me to go and talk to him on the same.

“I therefore took their forms and went into the boss’s office to try and talk to him so that my friends could get what they wanted.

“At the office, I talked too much English that the CO probably couldn’t understand. He refused to sign the forms for them to receive the loans but interestingly, he momentarily left me in his office after my futile attempt to have him sign them.

“Without thinking, I immediately took his rubber-stamp and rubber-stamped all the forms then subsequently signed them to give my friends what they wanted without his permission.

“Fortunately, it worked and my friends ended up receiving the loans but the incident ended up costing me my career in the Air Force later in life. I lost my job in the Air Force because of this mistake,” he said.

Omale was among the eleven KDF officers that perished in the aftermath of the gruesome plane crash that happened at Oltepesi in Kajiado county on June 24th.