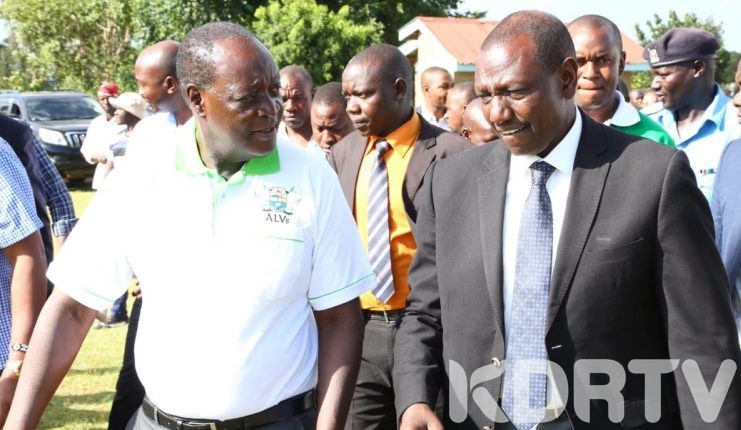 The Deputy President William Ruto has made continuous visits to the western Kenya with hopes of yielding positive support for 2022 Presidential bid.

A deep look into the hustler’s record tours is dominated by Western counties including Bungoma, Vihiga,Kakamega and  Busia.

He has basically made visits to all Counties in Western Province.

Well, the visists have started paying off as a good number of his supporters has been increased with majority of Western leaders decamping to his team.

The most vocal leader and defender of DP William Ruto is Bonny Khalwale who is Kakamega’s former Senator.

Khalwale defected to Jubilee and has since pledged his full support to Arap Samoei recruiting members one at a time.

A section of leaders from Western have pledged to continue supporting the Deputy President William Ruto in his bid for 2022 presidency #FridayBriefing @Ashleymazuri @TheJesseRogers pic.twitter.com/PMC3FD8ejl

The most recent visit was a fundraiser in Luanda, Kakamega County where the DP echoed the President’s remarks on dynasties and inherited leadership.

“Leadership is chosen and comes through a vision painted by the people. It is not about tribe, religion, wealth or origin. It is God sent,” said DP Ruto.

Over the years, Kenyans have been known to be poor voters who can be easily be manipulated by handouts and small projects here and there.

Statistically, DP Ruto has been in the records as a care giver who dashes out money in fundraisers and churches  and has been very lenient in the Western region.

He has been depicted to represent the hustler’s hence commonly referred as the ‘Hustler’ himself.

With different PR stands here and there, the DP has invited himself into the hearts of many Kenyans, more so the middle class people.

In a video that was making stunts on social media, he was caught bringing his motorcade to a standstill in the middle of a busy road and buying roasted maize from hawker by the road side.

Throughout these visits to Western Kenya, the DP has resurrected different projects and developments and set up plans to resuscitate the fallen sources of income in the area.

FORD-KENYA DEPUTY party leader Bonny Khalwale defects to Jubilee; he made the announcement at his Malinya home where he is hosting DP Ruto. pic.twitter.com/M7vHKvqrMz

DP Ruto in Luanda, Vihiga County asks Kenyans to ensure they are counted during the census exercise. pic.twitter.com/T2GoxpVWqE

Ideally, he has even flagged off some of the major projects and graced events hosted in the region including graduation ceremonies.

He once promised to help bring Webuye Pan Paper Factory and Mumias Sugar back on their feet, something that is yet to be commenced.

During the last census, Luhya ethnicity came second with a population of about 5.3 Million people.

It is obvious that the Luhya community dominate during elections with a higher percentage hence a hot spot for any leader with the intents of emerging winner.

Therefore, Ruto’s target in Western Kenya is categorized and plotted to garner him more votes during the 2022 presidential election bit.

He has already recruited some of the leaders and the only remainder is a few more people who will add numbers to his team and the Western region is secured.

This might not be easy since the region was formerly known to be ODM leader Raila Odinga’s stronghold, but slowly with fundraisers here and there, he is bound to take over.