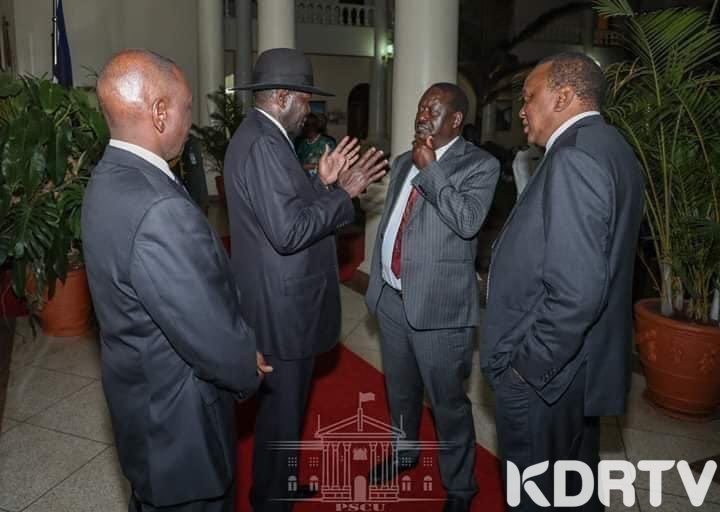 A close ally of the Deputy President  who requested for anonymity, has revealed that Dr. William Ruto will  be giving a media brief on his tenure as Kenyas’ number two, but refused to reveal or divulge the contents with speculations rife that the Deputy might be planning to resign from President Uhuru’s Government.

The Melodrama in Nairobi State House is now murkier and has made the Deputy President handlers to advise him to resign as soon as Possible because of unhealthy relationship with his boss.

A picture allegedly taken in Statehouse where President Uhuru Kenyatta and the Permanent Representative to the African Union on Infrastructure Former Premier Raila Amollo Odinga, in state house with the South Sudanese President Salva Kiir, listening to him while President Uhuru keenly listen to Odinga advise Kiir and Ruto standing at a distance from them has sent mixed reactions in the political arena in Kenya. 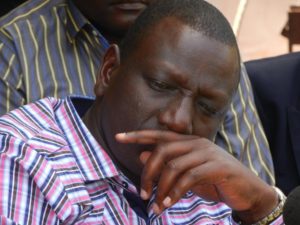 Time will tell if this is true, but pundits say a picture speaks louder than a thousand words and gauging from the Body language of the Deputy President Dr. William Ruto, things are not aligning as expected and it seems the President listens to Raila Odinga more than him.

Rife Speculation has been going on in social media that the Deputy President has been sidelined in President Uhuru’s government and now it’s crystal clear that Raila is the Chief Advisor to the President and his Deputy is just but a spectator.

Dr. William Ruto has been pounding words and firing salvos to Raila on his inability to bring or spur development in Kenya, telling Kenyans that he’s the lord of Poverty but Raila hit back at Ruto at his own backyard in Keiyo County when he was invited by Cherangany Member of Parliament Hon. Joshua Kutuny to his mom’s retirement party.  Hon. Joshua Kutuny claims to have brokered the Handshake deal between Former Premier Raila Odinga and President Uhuru Kenyatta.

In that Party, Raila used the platform to attack the Deputy President William Ruto, accusing his friends of stealing or miss-appropriating money meant to build dams at Kimwarer and Arror in Kerio Valley just a stone throw away from the sites of the proposed dam locations.

Ruto should be the last person to attack me, Raila told the gathering that was well attended including the area County Governor Mr.Tolgos, who requested Raila to be a regular visitor to his County and have a trickle down effect of the Handshake deal.