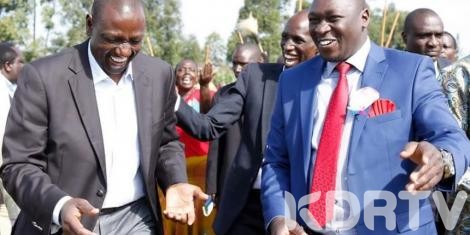 Elgeyo Marakwet Senator Kipchumba Murkomen will face off, in what promises to be a titanic battle, with Cherangany MP Joshua Kutuny on NTV.

NTV announced on Tuesday afternoon that the two would be part of the panel on The Sidebar to discuss The Sagana Dialogue. Former Kiambu Governor William Kabogo and former Nyeri Woman Rep Priscilla Nyokabi are also guests on the show hosted by Ken Mijungu.

Anxiety checks in as the anticipated BBI report is set to be released. The content has been the subject of loud whispers & the authors are building consensus but the subject is deeply dividing along political affiliations.Will it stand or fall ? Tonight on #Sidebar w/@KenMijungu pic.twitter.com/IChkyioZ6j

But hours before the interview, Kutuny alleged that Murkomen, who is one of Deputy President William Ruto’s foot soldiers had chickened out of the interview. The Cherangany MP claimed that the Senator was afraid of facing him.

“I am shocked to learn that Elgeyo Marakwet Senator Kipchumba Murkomen has chickened out of tonight’s popular Sidebar debate hosted live by NTV’s Ken Mijungu.

I don’t understand why Murkomen is issuing conditions to the station that he will not attend the show if I will be one of the panelists. By demanding that my name be dropped gives me a strong reason to believe that indeed the senator has developed a phobia towards the debate.” The MP claimed.


However, Murkomen has bashed Kutuny for spreading fake news. Taking to his Facebook page, he urged his followers to ignore the MP, insinuating that he might be having a problem communicating in English.


In a separate post on Twitter, The Senate Majority Leader said that he was looking forward to a sober and issue-based debate on the show.

Looking forward to a sober and issues based debate tonight at #Sidebar with @KenMijungu at @ntvkenya pic.twitter.com/Hpt5RYv6Ji

Kutuny, a member of the Jubilee faction of Kieleweke, that is fighting the DP.

During the interview, Murkomen accused the Cherangany MP of fighting Ruto, a man who allegedly picked him from selling charcoal and made him an MP.

“Kutuny, you need to respect the Deputy President, he picked you from your charcoal business when you were nothing and made you who you are today,” Murkomen shouted.


Kutuny revealed how he picked Murkomen from the streets and made him Senator. He said he gave the senator his first car.

“Why are you forgetting that I’m the one who picked you from the streets? I used to send you money every weekend through my wife. I even bought you the first car,” Kutuny shot back.