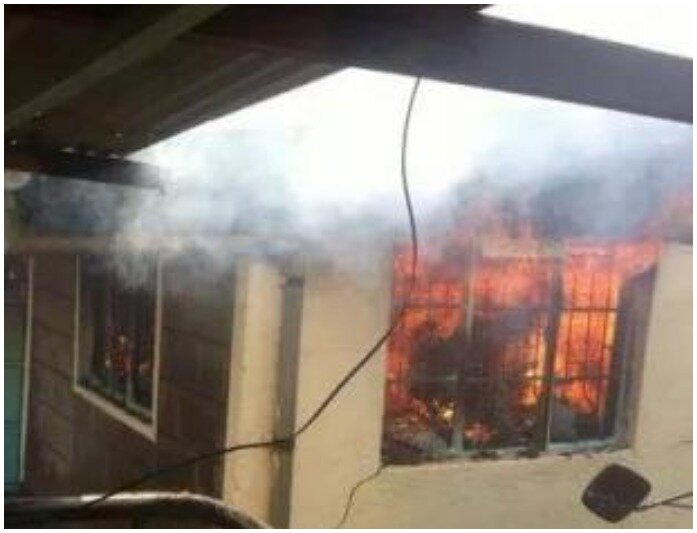 A man in Keroka, Kisii went on a rampage after finding out that his wife has been impregnated by a younger man in the area.

Geoffrey Momanyi, 45, razed his house and destroyed two others after finding out that his 36-year-old wife, Irene Kerubu has been impregnated by a 28-year-old gym instructor.

Momanyi was angered by his wife’s infidelity that he decided to burn the house and relocated to another town.

Momanyi said that his wife had started complaining that he no longer satisfy her in bed and that she hates his tummy which had grown bigger.

“I have decided to bring down my houses because I am angered by my wife’s sex escapade, she even confessed she is carrying that young man’s child. Where am I relocating to? I do not know,” An angry Momanyi was seen in the clip telling a host of neighbours.

READ ALSO: Key Witness Shares How They Planned And Killed Deputy Governor At His Home In Kilifi

“I own several businesses here, which include posho mills, a retail shop and several tuk-tuks but telling how people will take me after this incident? I deserve respect, I can’t stomach this.”

The businessman further revealed that his wife took advantage of his absence, occasioned by frequent of business trips, to sleep with the gym instructor in their own matrimonial bed.

“My wife started behaving ghastly, she no longer wanted to make love to me. I am always travelling for business reasons but whenever I came back she would treat me so cold. It was unusual, I knew something was wrong,” said Momanyi.

After busting his wife in the act, she confessed to having an affair with the gym instructor for sexual satisfaction and blamed her husband for scoring dismally in bed.