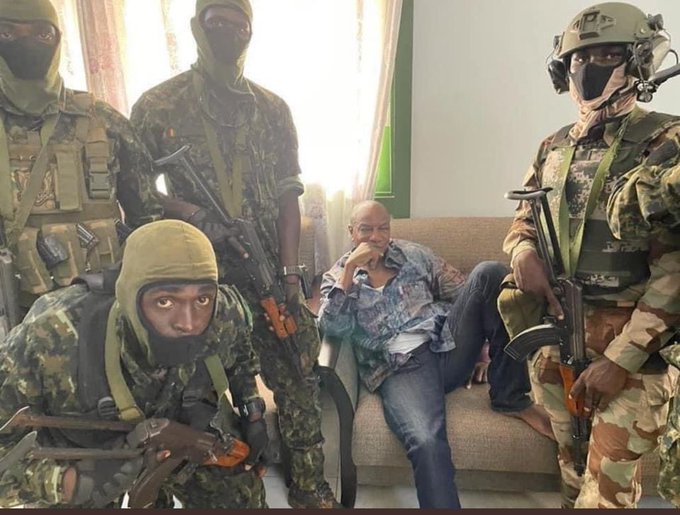 The UN Secretary-General Antonio Guterres has condemned the coup in Guinea and called for the immediate release of the detained President Alpha Conde.

I am personally following the situation in Guinea very closely. I strongly condemn any takeover of the government by force of the gun and call for the immediate release of President Alpha Conde.

1:14 PM: Soldiers Claims they Have Taken Over and Have Resolved the Government

Soldiers have claimed to have seized power and dissolved the Guinea government after heavy gunfire in the capital Conakry.

Thus the fate of the President of Guinea Alpha Conde is not known after a video showed in the hand of soldiers who claimed they had held a successful coup.

The soldiers appeared on national TV, claiming that they have dissolved the government.

Special forces in Guinea have appeared on National TV to announce they have taken power pic.twitter.com/4cN4BkoAY8

However, the defense ministry said that the attempted take over had been thwarted by the presidential guards.

The TV address saw nine unidentified soldiers wrapping themselves with the national flag, claiming they dissolved the government due to rampant corruption, mismanagement, and poverty.

They called themselves the National Committee for Reconciliation and Development, and they said they dissolved the constitution and, in consultation to create a new one.

However, many reports have indicated that the coup was led by an elite unite headed by a former French legionnaire, Lt Col Mamady Doumbouya.

A video of the seized president being compelled to say he is unharmed has made rounds on social media.

Those behind the coup said that all the land and air borders had been closed for a week.

However, the troop loyal to the president have reportedly contained the threats and repelled the group of assailants.

Unconfirmed reports indicate that three soldiers have been killed during gunfire had in Guinea`s capital.