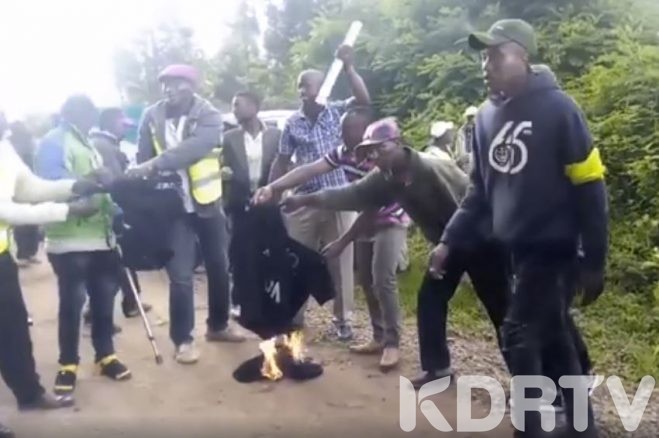 At least 10 people have been arrested over the chaos that erupted at DP William Ruto’s church function in Nyeri County on Sunday.

Ruto was poised to preside over a fundraiser organized by Nyeri Woman Rep Rahab Mukami at Giakanja Boys Secondary Schoool.

Even before the function started, Gatundu South MP Moses Kuria accused his Nyeri Town counterpart Ngunjiri Wambugu of planning to disrupt the DP’s event. He asked Interior CS Fred Matiang’i and his PS Karanja Kibicho to ensure law and order.

“I really fear for the lives of those goons given that the AIPCA faithful are the real freedom fighters who liberated this country. The body count might be shocking,” Moses Kuria said through a Facebook post.

Youths allied to Jubilee factions of Kieleweke and Tanga Tanga clashed at the gate a few hours to the event.

Trouble brewed when the Tanga Tanga group allegedly grabbed T-shirts from Kieleweke and set them ablaze. The T-shirts were inscribed ‘Uhuru’s bedroom!’

Ngunjiri Wambugu is an ODM agent in Central Kenya capable of doing anything to gain clout. He hired goons to stage play burning of Uhuru's t-shirts & tried to convince Kenyans it's Moses Kuria & DP Ruto's doing so they'd turn against the DP upon his Nyeri visit today… pic.twitter.com/fz3n4IdrnB

But the Tanga Tanga camp has refuted these claims saying that Ngunjiri hired the group which burned the T-shirts. According to Tanga Tanga, the MP who is one of Ruto’s biggest critic, wanted to propagate the idea that the DP and his followers do not respect the president.

Reports on a local daily claim that police had to fire in the air to disperse the rowdy youth, some of whom were arrested with crude weapons including knives. Ngunjiri has blamed four MCAs whom he accused of trying to prevent him from attending the function.

When Ruto finally arrived, Ngunjiri refused to rise from his seat to go and welcome the DP. Other politicians and church leaders present went to welcome Ruto after his chopper landed.

Mr Wambugu also refused to address the gathering despite being invited to the podium by the Woman Rep.

The MP later took to social media to explain what transpired at the event.

“There’s a tall guy here – wearing a sleeveless jacket, and carrying a stick. He’s the area MCA Ruringu – one Kariuki. His work today was to beat up anyone associated with me, then hand them over to the police. He had sworn that I would not attend the event in Giakanja. At some point he even tried to throw a stone at my car as I was getting in. The guys carrying sticks are part of his gang. They are also the ones who burnt Uhuru’s T-shirt’s. Their work was to identify my supporters, beat them up, then hand them over to police. The other fellows with him call themselves ‘serikali ya vijana