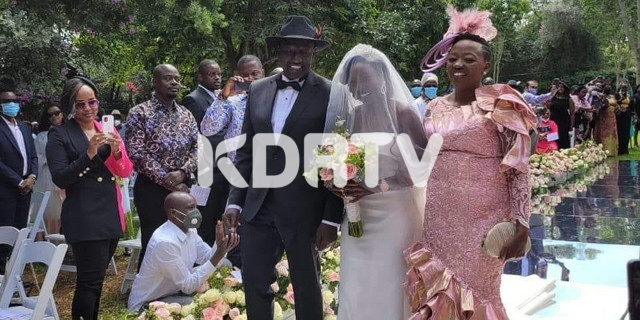 On the show, the DP touched on various topics and even took a few questions from listeners.

A listener wanted to know how the DP felt after marrying off her daughter to a Nigerian and not a Kenyan man; to which DP said he had no problem.

Ruto’s daughter, June, got married in May to her Nigerian fiancé Dr Alexander Ezenagu at their Karen home.

READ ALSO: Religious Leaders Push For Women To Be Banned From Using Boda Bodas: They Are Exposing Their Body Parts

The traditional ceremony was attended by only a handful who were invited to witnessed the two lovers exchange wedding.

In the show, DP Ruto also revealed the most important marriage advice he gave her daughter before she left with the Nigerian.

The DP told her daughter that she needs to know they are not on the same level as her hubby and should be submissive to him if she wants the marriage to be a success.

The submive narrative is something many Kenyan women have been against. Women demanded equal treatment in marriages nowadays ruling out the popular belief that men are in charge in unions.

The DP and his wife will be celebrating their 29th marriage anniversary in December 2021, a few days after he turns 55.

In 2020, Ruto combined the two celebrations and invited children from 52 orphanages to share in the joy at his Sugoi home in Uasin Gishu county.