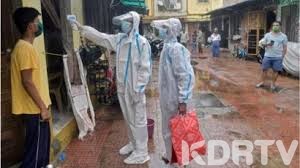 Coronavirus in India higher in a day

(KDRTV)-India`s Health Ministry has announced that the country has recorded 38902 positive cases of COVID-19, the highest spike in 24 hours since the virus broke out in the country

The Ministry also announced that the number of deaths was 543 as the country`s total coronavirus cases shoot to 1, 776, 618

The total number of fatalities in India has reached 26,816 deaths

The same Council declared that it will carry out the BCG vaccine used against tuberculosis to determine if it can help deter the occurrence of coronavirus infection and lessen the severity of the virus among the elderly as well as mortality.

In the meantime, experts maintain that the total number of global coronavirus infection is much higher than 14 million due to the fact that various countries across the globe are confronted with a shortage of testing equipment

According to John Hopkins University as of July 18, the global number of fatalities has surpassed 600, 000.

According to the university, the United States is leading the list with 140, 103 deaths, followed by Brazil with 78,772 and the third in the list is the United Kingdom with 45, 358