Radio host Jalangó managed to raise millions in cash in his campaign fundraiser held last week Friday at one of the hotels in Nairobi.

The fundraiser which was aimed to support his 2022 parliamentary bid was a huge success as close friends and business associates contributed millions for him.

According to the Langata MP hopeful, he managed to raise over Ksh 20 million in just one day.

The event that was dubbed, “I believe in your journey Jalang’o”, saw popular faces such as Mombasa Governor Ali Hassan Joho, who happens to be Jalang’o’s longtime friend, donate Ksh1 million.

The two were, however, not present at the event.

He topped his contributions with two cars for his campaigns.

Others who donated include:

Lawyer Silas Jakakimba, who also has an interest in the same Lang’ata Parliamentary seat, gave Ksh111, 000.

Jalang’o friends from the US identified as Kelly gave Ksh600, 000.

Several businessmen also contributed but said they didn’t want to be mentioned. 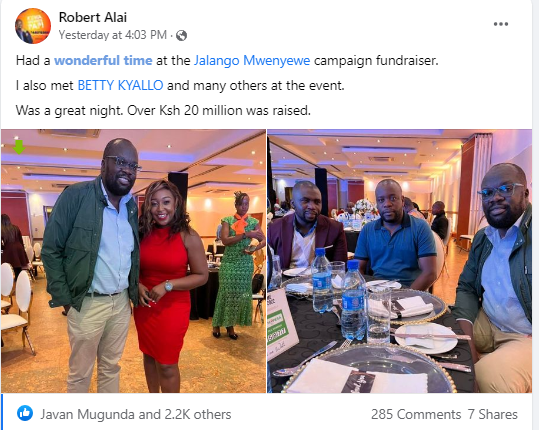 Alai later took to social media to confidently say they managed to raise over Ksh 20 million that day.

“Had a wonderful time at the Jalango campaign fundraiser. I also met Betty Kyallo and many others at the event,” he said.

“Was a great night. Over Ksh 20 million was raised.”