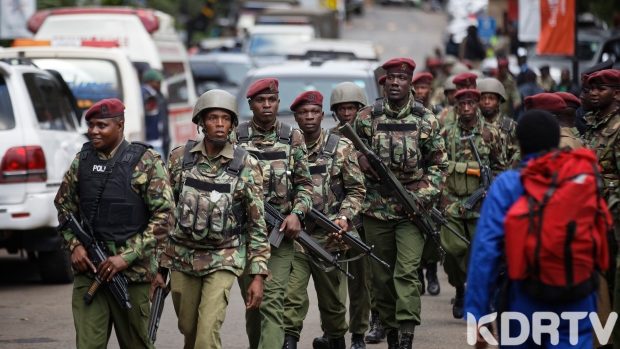 Three Kenyan security officers in are being detained by Ugandan soldiers in what could be the latest controversy surrounding fishing rights in Lake Victoria.

The officers were arrested and disarmed by the UPDF soldiers on Monday near Mageta and Hama Islands in Lake Victoria and taken to the neighbouring country by boat.

According to witnesses, the officers’ guns and phones were taken away before they were taken to Bugiri Mainland Prison in Uganda at about 6pm.

Siaya County Administration Police Commandant Patrick Lumumba said the 3pm incident involved up to eight soldiers on patrol. He also said the officers were rounded up and put together with Kenyan fishermen found catching fish in Ugandan waters.

Lumumba further said the attackers, who were heavily armed, first hijacked five Kenyan boats and took away their engines. “Our officers were overpowered by the heavily armed attackers who lay an ambush on the officers who assumed they were civilians and fishermen,” said Lumumba.

Nyanza Regional Commissioner Moffat Kangi was set to visit the area to try and resolve the conflict.

In November last year, the Foreign ministry had to intervene after 17 fishermen in Homa Bay were arrested and detained in Uganda over illegal fishing. A number of this group claimed they were also forced to pay fines before they were released.

While Kenya sends police officers to patrol the lake, Uganda has sent the Special Forces Command, a unit of the Uganda People’s Defence Forces.
In February this year, President Museveni argued he sends the military because his police officers and the marine authorities were too corrupt to protect Ugandan fish.

Meanwhile in Siaya, fishermen are up in arms and do not intend to hold more meetings. They are instead demanding for a patrol team that equipped with sophisticated weapons to match their Ugandan counterparts.