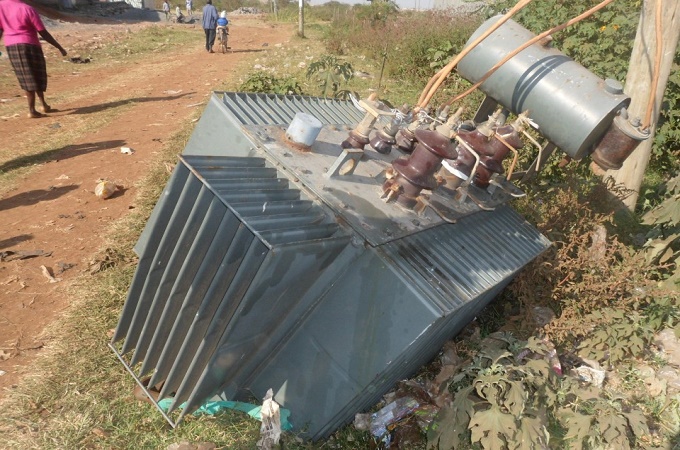 Residents in Nyakoe Ward, Kitutu Chache South, Kisii County have been forced to opt for prayers in an effort to curb rampant cases of vandalizing of Kenya Power transformers and stealing electric wires in the area, which has left them in darkness.

The villagers held prayers at Nyanguru Catholic church for the thieves over the weekend and are planning to continue till the vice stops.

Ward Representative, John Amisi said that villagers should also be vigilant and report all the suspects doing the vandalizing.

“It is sad that while the government wants every family to have electricity, other people are hell-bent to vandalize the equipment and leave residents in darkness,” Amisi said.

According to Kenya Power Security officer in charge of South Nyanza, Mang’era Moronge, vandalizing has been rampant in the area and they are working closely with the police to ensure they apprehend the culprits.

The security officer said people arrested with the company’s wires and equipment will be fined Ksh1million and be jailed for a year or both, stressing the theft was hampering connectivity of power in the area.

“Vandals steal wires and meters and sell them to unsuspecting buyers. I urge residents not to buy them and instead follow the right channels to get connected to electricity,” Moronge stated.

Kenya power has been working day and night to ensure vandalism of transformed stops.

In 2012, replacing transformers cost Kenya Power $4 million (Sh412 million). Kenya has had some success fighting transformer vandalism.
In 2013, 535 transformers were vandalised, a stark drop from 898 in 2011, according to reports by Reuters quoting Kenya Power.

The drop was mainly linked to a 2012 law which imposed a minimum 10-year-jail sentence on transformer vandals. Previously vandals were fined Sh5,000 or sent to prison for six months.

Subscribe to watch latests videos
In this article:Kenyans,Kisii Residents,KPLC,KPLC Kenya