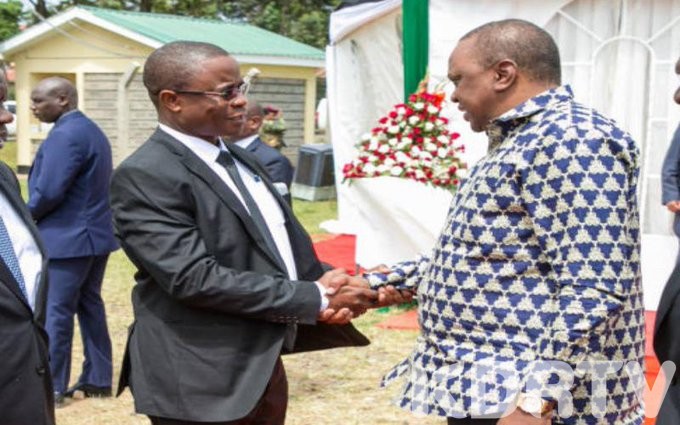 Late Bomet Governor Jorce Laboso’s widower has been appointed as State Corporations Advisory Committee for a period of three years.

This is in according to a gazette notice  on October 14, where the widower among other appointees landed state jobs by President Uhuru.

Mr Abonyo came into the light after the death of his wife Joyce Laboso, who succumbed to cancer after long term ailment.

He was appraised for his special tribute to the late wife emerging the best speaker, and unwavering support for his children.

It has been alleged that after the death of his wife, ODM leader Raila Odinga recommended him to the President and and asked him to consider offering him a job.

Laboso succumbed to cancer and had sought medication in India for months and things got worse when she came back to Kenya, dying at Nairobi Hospital in July aged 58.

Edwin Abonyo, the widower of the late Bomet Governor Joyce Laboso is among the seven individuals appointed to the State Corporation Advisory Committeehttps://t.co/HN7FbygKUw

Her burial was at her husband’s ancestral home, Koru Kisumi County, with President Uhuru among the attendees.

Among other appointees are Former Othaya Member of Parliament Mary Wambui who succeeded Mwai Kibaki as the Othaya MP.

READ ALSO: Joyce Laboso Was Like My Own Daughter- Raila Odinga

Wambui has been appointed the chairperson of the National Employment Authority announced by Labour Cabinet Secretary Ukur Yatan who said that Ms Wambui will serve the authority for a period of three years.

All the appointees are to serve for three years, effective October 14.