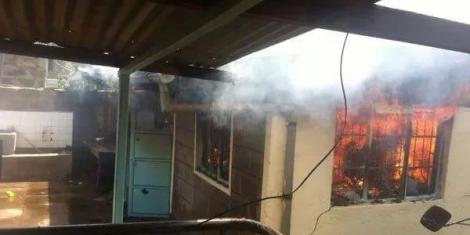 A man has been charged with arson at the Kibera Law Courts after burning her ex-wife’s house following a bitter breakup.

Patrick Kirimi is accused of burning Hanna Wambui Kinyanjui’s house estimated to be worth Sh100,000 in Waithaka, Dagoretti in Nairobi on July 30, 2021.

According to court documents, Kirimi was allegedly seen by neighbors going into the house that was rented to a female tenant minutes before it went up in flames.

Wambui told the court that on the fateful day, she was called and informed her house in Dagoretti was up in flames. She rushed from Uthiru to the place only to find everything reduced to ashes.

READ ALSO: Kenyans Abroad: Life In Diaspora Is Not Easy, You Need To Come Here And Work Harder

Her tenant, who joined her minutes later, was reduced to tears after watching all her property and documents vanish in the fire.

Neighbors insisted that it was Kirimi, a private security guard, was behind the fire.

The accused however denied the charges before Senior Principal magistrate Derrick Kutto of the Kibera Law Courts.