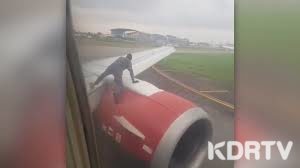 On Friday Morning, a Nigerian man jumped on to the wing of an aeroplane at the domestic wing of the Murtala Muhammed International Airport in Lagos, Nigeria.

According to a video recorded by one of the passengers in the plane shows the man attempting to gain access into the cabin of the Azman Air flight just about to take off. He was spotted by the pilot who slowed down and turned off the engine as the man sought a way to get into the plane.

The man remains unidentified as he is currently in police custody and being interrogated by Nigerian Airport Authority.

After the bizarre incident, the airline did a thorough scrutiny of the passengers and their luggage before declaring the plane safe to travel to Port Harcourt in Nigeria’s Niger Delta.

It still remains unclear how the man was able to gain access to the tarmac and run to the plane.