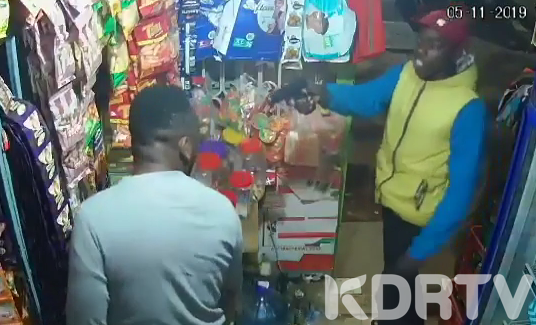 The police are hunting for two armed thugs who shot and injured a man at an M Pesa in the Kasarani area.

The police are hunting for two armed thugs who shot and injured a man at an M-Pesa shop in the Kasarani area.

The victim recognized as Richard Muema is recovering at Kenyatta National Hospital after one of the robbers shot him eight times.

A CCTV footage seen by KDRTV shows the two armed men making their entrance into the retail shop at around 10.30 pm, with one of them brandishing a pistol.

One of the robbers astutely surveys the outer side environs and abruptly orders Muema to the ground, and he immediately complies. The gunmen then shift their attention to the shopkeeper.

Shortly Mueni could be seen launching an attack on the gunman, and that is when the shots began.

The robbers open fire and shot Muema as he follows him outside.

The man has undergone surgery to remove the gun from his body, and the family is now seeking financial help to settle the hospital bill.

However, the police have sought the members of the public to help them identify the suspects.