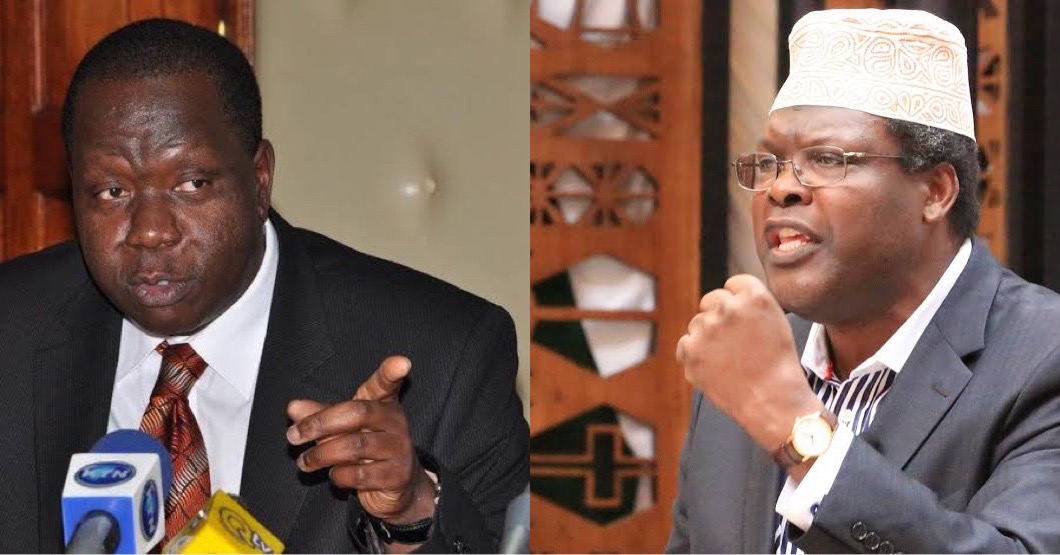 In a statement on social media Miguna stated that the two should pay him Ksh 7 million he was awarded as damages by the Kenyan Court.

“To Fred Matiang’i, Karanja Kibicho and Major General Gordon Kihalangwa: You are hereby directed to contact my advocate, Adrian Kamotho Njenga, and sort out the damages and costs the High Court and Court of Appeal awarded me in the various cases I won since 2018. Do so promptly before I land,” Miguna stated

The exiled lawyer added that red alerts should be issued against CS Matiang’i and PS Kibicho claiming that the two had committed crimes.

“Whatever goes around comes around. The mafia like Fred Matiang’i, Kibicho and Kihalangwa issued red alerts against me for more than 4 years. Now is their turn to contend with red alerts for crimes they committed against Kenyans,” he remarked.

Dr. Miguna in June this year sued Matiang’i and Kibicho in Canada, demanding Ksh1.7 billion in compensation for damages incurred during his expulsion.

He testified in court that his 2018 deportation had injured his reputation and business.

The outspoken lawyer added that the fee would cover damages such as illegal detention, assault, and slander, among other things.

Miguna’s demands come just a day after he was given a new passport by William Ruto’s government. Taking to twitter, Miguna stated that the new Kenyan head of state honoured his promise to let him come back to Kenya.

Also Read: Miguna Miguna Finally Gets His Passport, Set to Return to Kenya